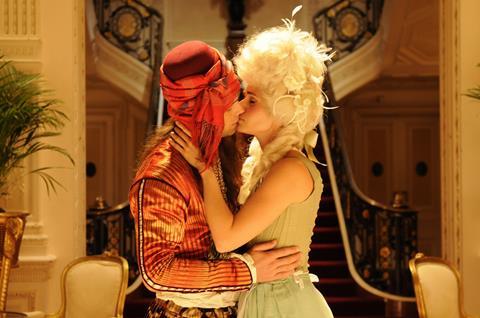 A lush operatic romp set against the elegant backdrop of a stunning Scottish country house, First Night is an engagingly breezy romantic comedy- drama as a group of singers gather to rehearse a performance of Mozart’s Cosi Fan Tutte and where life – just for a while – starts to imitate art.

The opera’s themes of love, jealousy and mistaken identity are repeated in real life, with new relationships forged and established ones tested.

The script was originated by John Mortimer (the late, great, English writer who scripted Brideshead Revisited andRumpole Of The Bailey), but finished by director Christopher Menaul and Jeremy Sams. The cast is strong in places, though never quite gels, and as classy package First Night (which shot under the title Cosi, and was also titled Sizzle at one point) it appeal to distribs and TV buyers, and the niche opera appeal could work for one-off platform screenings.

A cast of young opera singers are gathered together at the country house by rich industrialist Adam (Richard E Grant), himself a frustrated opera singer who wants to take the opportunity to sing the part of Don Alfonso. The singers are under the operatic direction of Celia (Sarah Brightman), who Adam is secretly in love with.

What follows is a series of romantic – and sometimes mildly comic – dalliances and misunderstandings between the remainder of the young cast of singers (headed by Mia Maestro and Julian Ovenden) that contrasts with the tangled plottings of Cosi Fan Tutte. The opera’s themes of love, jealousy and mistaken identity are repeated in real life, with new relationships forged and established ones tested.

The film – which screened at the Glasgow Film Festival - is at its best when interweaving the storylines in amidst the stately backdrop (the film was shot at beautiful Manderston House in Duns, Scotland), with Richard E Grant bringing just the right amount of wistful eagerness and Mai Maestro impressive as the young, ambitious, singer who is reticent to let love come close.

The casting of Grant and Sarah Brightman (best known as a stage performer – in The Phantom Of The Opera and other musicals – and recording artist) help give the film an edge, which helps balance some of the more lightweight casting of other roles. Brightman especially has an easy warmth and grace. The set piece scenes of extracts of the opera are nicely staged, and impressively sung.