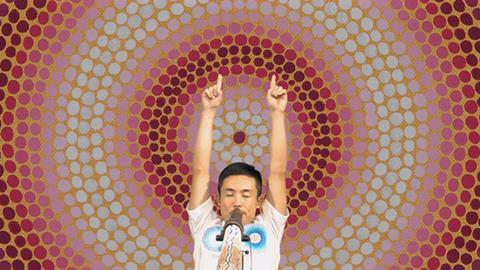 More art installation than formal feature documentary, music-themed film Flashback Memories 3D, which screened in competition at the Tokyo International Film Festival, intriguingly blends concert footage with the powerful story of how musician Goma lost much of his memory after a traffic accident, but feels way too padded out to sustain its running time.

Didgeridoo performer Goma lost much of his memory because of a traffic accident that resulted in a brain injury, and he struggles to recall moments with his wife and child as well as his performances over the years.

Originally shown on Space Shower TV in Japan earlier this year in a 2D version that ran 56 minutes, the film uses the 3D format for layering rather than the usual in-your-face tactics, and while this gives much of the concert footage a smart installation style feel (especially as his chosen instrument is a large didgeridoo) in the end the format feels underused.

Didgeridoo performer Goma lost much of his memory because of a traffic accident that resulted in a brain injury, and he struggles to recall moments with his wife and child as well as his performances over the years. While looking back on his rehabilitation and recovery with his family’s help, animation recreates his “flashbacks” ― incongruous images that suddenly appear in his brain – while the performance scenes reinforce his talent and innate link to the music.

Goma – along with friends and colleagues – had video recorded much of his years touring the world, which offers up a plethora of images (from Australia, the UK other parts of Europe and Japan) for director Tetsuaki Matsue to weave into the film as well as project onto a backdrop that sits behind Goma and his band (they are called Goma & The Jungle Rhythm Section) when they play the 3D concert sequences.

This enables him to try and show the past and present – memories and real-life – as Goma submerges himself in his music. There are some tender images – especially of Goma with his family – and some enjoyable musical interludes (his fusion of traditional didgeridoo playing with immersive percussion is powerful) though it is largely static in presentation, which encourages the feel of an installation.