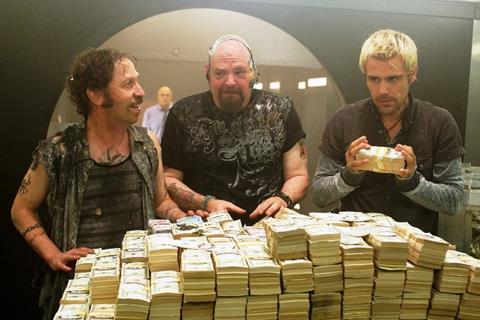 The burlesque of a failed caper, Flypaper, the latest from the writing team of The Hangover, is a farce that will rely on its cast (Patrick Dempsey, Ashley Judd) to go beyond the independent circuit in the US to the family audience…. there’s certainly no sex to keep children away.

Dempsey is the leading misfit here, as a medicated charmer with what seems like a form of autism that enables him to recall and compute numbers instantaneously.

The film is a heist-and-hostage comedy that reminds you that criminals, under pressure, are as neurotic as anyone else.  English-speaking territories where Dempsey is known are other markets.Dempsey plays Trip Kennedy, a suave but obsessive character who enters a bank at closing time, just as two groups of would-be robbers appear in the marble rotunda. One crew of ninja-suited crooks is professional, the other is a pair of gap-toothed and tattooed southern good old boys (Tim Blake Nelson and Pruitt Taylor Vince) who want to blow up a few ATMs for some extra cash.

Once Trip persuades the rival robbers to work at the same time, hostages are rounded up, fighting erupts, and everything goes wrong.

At Sundance, where Reservoir Dogs premiered in 1991, the bar is high for heist films. Lucas and Moore have chosen to go for laughs over intrigue or blood, although both of those are also present. Their flair in The Hangover was to have frustrated characters reflect on their lives as events flew out of control. Here they’ve done something similar, with conversations among the trapped hostages and crooks ranging from technology to anti-Semitism, and zinger lines distributed to the whole ensemble.

Dempsey is the leading misfit here, as a medicated charmer with what seems like a form of autism that enables him to recall and compute numbers instantaneously. Predictably, recalling the McGyver TV series of the 1980s, he figures out who’s behind the professional heist. He also pursues the reluctant Judd (the weak comedic link in this cast), who’s a teller about to marry a rich man.

Less predictable is the inanity of confinement in the bank (a former hotel in Baton Rouge, Louisiana, which is meant to be Chicago). As Weinstein, one of three Ninja robbers, John Ventimiglia dishes out borscht-belt abuse.  Matt Ryan, another Ninja, is a Brit who can’t hide his disdain for Jews or Blacks. When his accomplice Mekhi Phifer gives up on the heist, he laments, “I thought you people had balls.”

Director Rob Minkoff (The Lion King) indulges the farce’s cartoonish side, staging the comedy of errors as if it were theater, with character after improbable character rushing in from the wings to propel the action ahead.

Even before that action starts, another series of cartoons catches your eye in the credit sequence. Stick figures are lifted away with flypaper, in what looks like an homage to the master of the criminal farce, Blake Edwards.