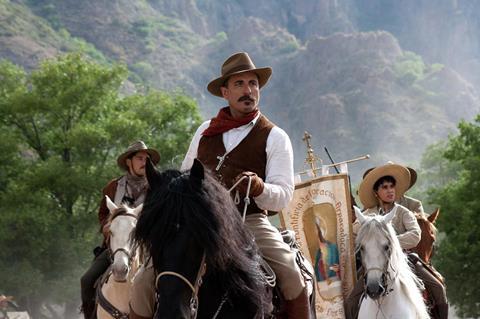 A little known religious war in nineteen twenties Mexico is the subject of For Greater Glory, a handsomely crafted but rambling and heavy handed would-be epic with Andy Garcia starring. Though this English-language Mexican production may have some appeal for faith-based and Latino audiences, mainstream moviegoers will be hard to convert.

While there is some Western-style gunplay there’s none of the grand scale action that a big budget Hollywood version of the story would probably have delivered.

After taking $4.1m in its home market - where it was distributed by Fox under the title Cristiada - earlier this year, the film gets a 700-screen US launch this weekend through ARC Entertainment.  A decent US showing might suggest potential in Hispanic markets elsewhere in the world.

The Cristero War broke out in 1926 when the Mexican government’s persecution of Catholics and ban on their religious practices led to the formation of a rebel army whose clashes with government troops left 90,000 dead over three years.

The film’s recounting of the historical events centres on Garcia’s General Gorostieta, a tough military mastermind who reluctantly joins forces with a battling young cleric (played by Santiago Cabrera, from Che) and a surly gunslinger (Drive’s Oscar Isaacs) to lead the rebels.

Other plot threads follow a woman who smuggles arms to the rebels (Catalina Sandino Moreno, from Maria Full Of Grace), an ageing priest (a briefly seen Peter O’Toole), the Mexican president (Ruben Blades), the US ambassador (Bruce Greenwood) and two young boys who join the rebel army.

However neither scriptwriter Michael Love (Gaby: A True Story) nor first time feature director Dean Wright (an award-winning Hollywood visual effects expert) manages to give the material much dramatic shape. And while there is some Western-style gunplay - and enough violence to earn the film an R rating in the US - there’s none of the grand scale action that a big budget Hollywood version of the story would probably have delivered.

While the story’s religious backdrop is always visible, specifically religious content is at first handled fairly subtly. That changes in the third act, which goes to melodramatic lengths to show how some of the rebels met their ends.