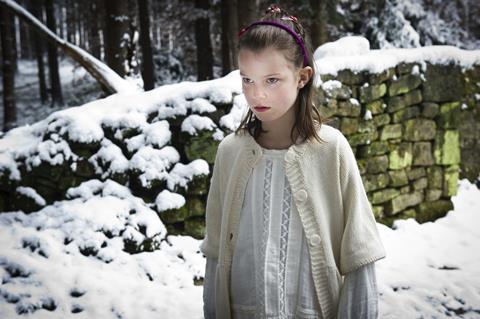 A nicely creepy horror tale, made with a great deal of style and appreciation of the genre, Forgotten (Du hast es versprochen)has a nice old-fashioned (in a good way) feel to it, and with genre films such strong performers at the box office could well appeal to savvy distributors and genre festivals.

It is driven by a strong performance by Mina Tander and a rich and chilling atmosphere that will see it being appreciated by genre fans.

Released on Nov 1 in Germany through Falcon Media, the film screened out of competition at Venice in the midnight screenings slot and is likely to be a strong performer in its home territory. Making her feature debut, German director Alex Schmidt shows a sure hand and understanding of the genre, though after a strong set-up the more visceral chills dry up as exposition hits it.

The film opens with in nicely creepy style with two nine year-olds playing in some snowy woods and coming across a suitably spooky looking underground chamber.

Young Hanna (Greta Oceana Dethlefs) scares her friend Clarissa (Alina Sophie Antoniadis) with the scary tale of a mute girl who never aged and how scared local villagers imprison her in the chamber where she vowed get revenge by finding someone to take her place. Rather foolishly going inside, the girls are terrified to see another girl in the darkness…they run, with their clothes covered in blood.

Twenty-five years later the now grown up pair - Mina Tander as Hanna and Laura de Boer as Clarissa – decide to return to that self-same spooky and misty island. Unsurprisingly they are haunted by the incident of their past. There are plenty of strange old locals with odd ways to suggest this isn’t the best of idea, but both women and suffering and need to face their demons.

What they discover is stories of sightings of a strange girl, Maria (Mia Kassolo) who vanished when they were children. Hanna gradually discovers that she knew the girl, though has no recollections of her until a flashback and a vague memory of a pledge to be best friends forever. The scene is set for spooky happenings a-plenty – as well as slightly telegraphed twist – with Schmit and her cinematographer Wedigo von Schultzendorff delivering some nicely atmospheric moments and relying on old-fashioned shocks and jumps rather than lashings of CGI.

As is often the case with horror films there is a niggling sense that Forgotten doesn’t quite know when and where to end, but it is driven by a strong performance by Mina Tander and a rich and chilling atmosphere that will see it being appreciated by genre fans.