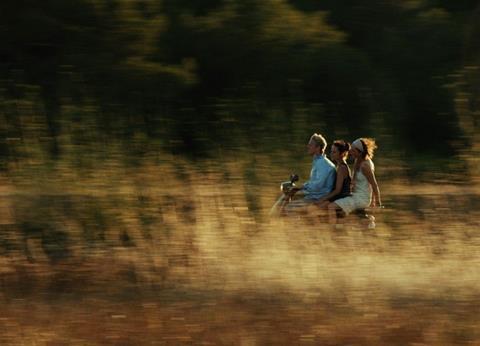 A young married couple from Berlin find trouble and strife in a Mediterranean paradise in German director Ann-Kristin Reyels’ thriller-tinged second film, which screened in the same Berlinale Forum section that launched her promising debut, Hounds, in 2007.

The director and cinematographer Besuch rack up the tension by juxtaposing glaring summer daylight and underlit night scenes.

Thoughtfully directed, and impressive as an actor’s film, Formentera fails the script test. Beneath its edgy exterior, this is a rather conventional dramatic parable about the superficiality of many northern Europeans’ dreams of the warm south, and the hollow post-hippy lifestyle of those who have been living it for years.

Reminiscent in some ways of Maren Ade’s Everyone Else – in that it deals with the way the dangerous freedoms of a holiday can act as a relationship catalyst, for better or worse – Formentera should enjoy a small run in German-speaking territories, but is too Avventura-lite to enjoy much arthouse action elsewhere.

The story focuses on Nina (Timoteo) and Ben (Lindhardt), a young German couple who have left their daughter back home with mum and headed for the Balearic island of Formentera, just south of Ibiza, to stay with older friends of Ben’s. It takes us a while to work out the dynamics and trace the attachments in this alternative family of post-hippies, which includes Christine (Seibt), who has a shop by the port selling kaftan, scarves and ethnic junk, her current partner Georg (Layton), and lugubrious Pit (Bruckner), who turns out to be Christine’s ex – though everyone keeps up the free-love pretence.

Also in and out of the restored farmhouse where these chilled out ex-pats live are perky German hippy-chick Mara (Krieps) and her French squeeze Pablo (Bruneau); their son Yoko is looked after by everybody, which of course (as when he rather predictably falls off a roof) really means nobody.

Nina is a little diffident about her husband’s friends, whose faintly incestuous ménage doesn’t exactly open up to embrace her, and the hairline fracture this creates is wedged open when she observes Mara flirting with Ben.

For a while we stay intrigued, as there’s an undertone of menace in this outwardly laid-back summer idyll – and a kind of wry irony too, as these aging children of the revolution display all the censoriousness and nosiness of the bourgeoisie they fled from.

The director and cinematographer Besuch rack up the tension by juxtaposing glaring summer daylight and underlit night scenes, and Reyels’ decision to let certain scenes run beyond their natural cutting point does sometimes bear fruit, though at other points (as in an overlong, self-consciously decadent beach-party scene) it drags. Timoteo stands out from the strong cast, morphing from free and easy summer spirit to jealous wife and from emotional security to existential terror in the course of the action.

In the end the film growls without roaring, veering into darker territory and then backing off as if afraid of the consequences. There’s a sense – present especially in a sequence shot on the neighbouring island of Ibiza – that what we’ve been watching here is not a real story, but the nightmare vision of a young wife and mother.

But this suggestion is simply floated out for us to nibble at if we choose. In the end, although the script probes away vigorously at its subject, its message is trite: the hippy dream has turned bitter, the warm south isn’t all it’s cracked up to be. Best to keep the family biological – and stay at home.