From Vegas To Macau 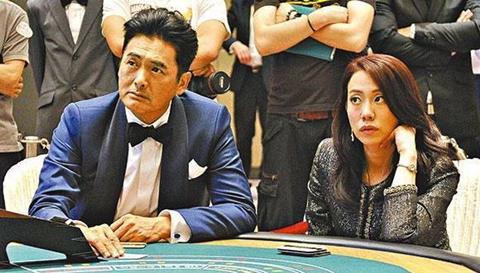 A heady blend of gambling, humour and action is the engaging and delightfully over-the-top heart of Wong Jing’s bright and breezy film headed by Chow Yun-fat and with enough cool and campy adventure to keep fans happy. Already a success in China, it should click in other Asian territories, though its sheer sense of silliness may not work in many other international territories where home entertainment may be its most likely outlet.

Chow Yun-fat brings his expected twinkly-eyed charm, and embraces the jokes about being almost 60 while also handling the effects-oriented action with aplomb.

From Vegas To Macau(which has an original language title of Doh cheung fung wan) may not actually be shot in Las Vegas, but it makes great use of its Macau backdrop and with Wong a past master at making gambling-themed hits it is easy to see how the film hits its targets. Plus it has Chow Yun-fat at his charming best, as smooth as smooth can be and tossing cards-as-weapons at bad guys to wonderfully lethal effect.

The film, of course, sparks a link to Wong’s God Of Gamblers trilogy which starred Chow, and while this time round the gambling salons and card-sharp skills are very much a backdrop rather than the core of the story there is enough to appeal to fans of films that blend gambling and gangsters.

InHong Kong, though, Cool’s stepbrother Lionel (Philip Ng) – who is secretly an undercover operative trying to get evidence against  a money-laundering syndicate run by Mr Ko (Gao Hu). Chased by bad guys he hides information on a giant teddy bear that gets passed on to Rainbow.

Detective Lorraine Lok (Jing Tian), who has also infiltrated Ko’s operation, asks Ken to challenge Ko to a card game and to try and get him to expose himself. The paper-thin plot involves a nasty truth serum and Ko’s henchmen’s attempts to recover the evidence as Ken and Ko go head-to-head on the card table.

Chow Yun-fat brings his expected twinkly-eyed charm, and embraces the jokes about being almost 60 while also handling the effects-oriented action with aplomb…especially the pack of metal cards he throws with lethal effect. Meanwhile Tse is engagingly at ease in the handsome hero role while Tong has little to do apart from be decorative, which is a shame as it could have been a far more interesting role if handled better.

As expected, the action scenes are beautifully choreographed by Nicky Lee Chung-chi and Wong Wai-leung, plus the martial arts skills of Zhang Jin (who starred in The Grandmaster) bring much to the film, despite the fact that his un-smiling bad guy has little to do but be nasty and fight.