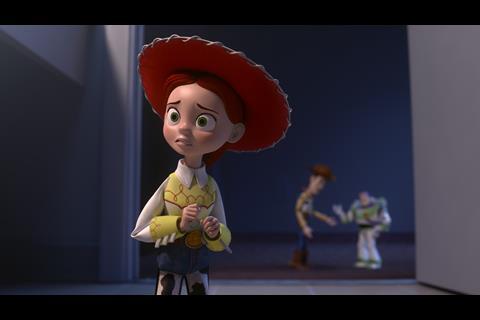 Jessie finds herself caught up in a mysterious sequence of events in Disney Pixar's Toy Story OF TERROR! The new 30-minute special premieres on US network ABC Oct. 16, 2013. ©2013 Disney-Pixar 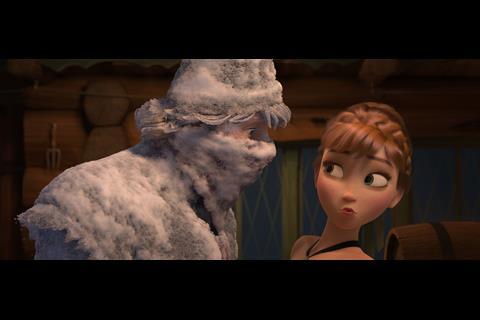 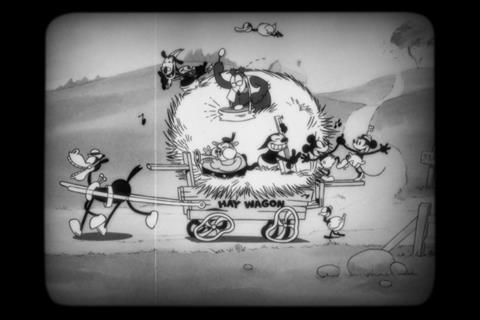 Mickey Mouse (voiced by Walt Disney himself), his favorite pal Minnie Mouse and a host of friends delight in a musical wagon ride in Walt Disney Animation Studios Get A Horse! 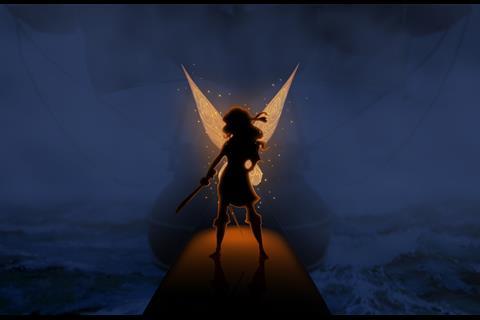 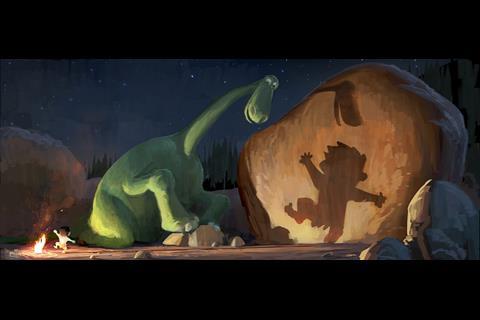 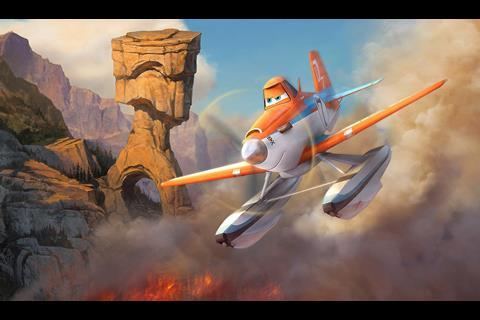 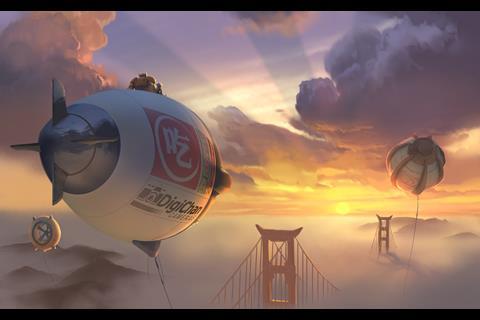 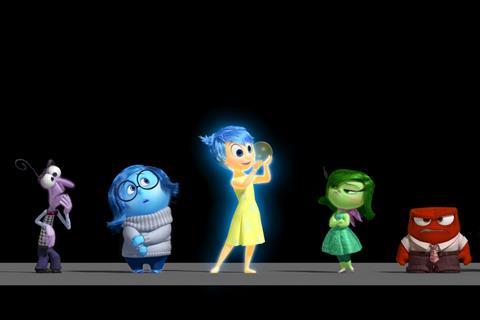 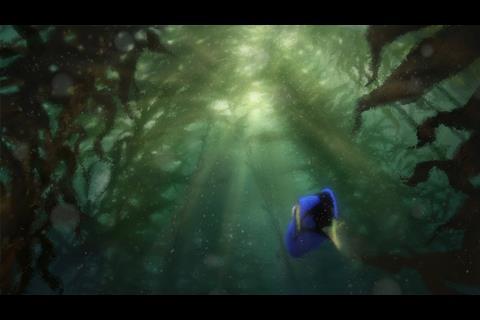 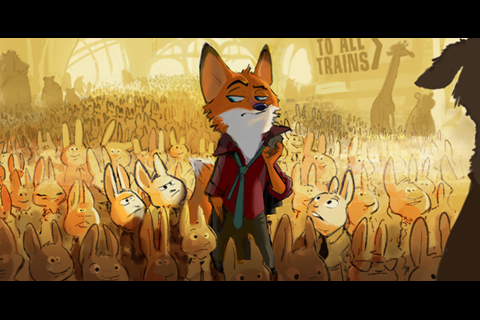 At the D23 Expo fan event in Los Angeles, artwork was revealed for new films from Disney and Pixar including characters from Inside Out, the next feature from Up director Pete Docter.

Lasseter surprised fans with a screening of the first 10 minutes of Disney-Pixar’s Toy Story OF TERROR! The D23 Expo audience was the first ever to see footage from the spooky new 30-minute special that features favorite characters from the Toy Story films. What starts out as a fun road trip for the Toy Story gang takes an unexpected turn for the worse when the trip detours to a roadside motel. After one of the toys goes missing, the others find themselves caught up in a mysterious sequence of events that must be solved before they all suffer the same fate in this Toy Story OF TERROR! From director Angus MacLane and producer Galyn Susman, Toy Story OF TERROR! premieres on US network ABC on October 16, 2013.

In Frozen, fearless optimist Anna (voice of Bell) teams up with rugged mountain man Kristoff (voice of Jonathan Groff) and his loyal reindeer Sven in an epic journey, encountering Everest-like conditions, mystical trolls and a hilarious snowman named Olaf (voice of Gad) in a race to find Anna’s sister Elsa (voice of Menzel), whose icy powers have trapped the kingdom of Arendelle in eternal winter. In theaters November 27, 2013.

Get A Horse! made its U.S. premiere at the D23 Expo. Featuring Walt Disney himself as the voice of Mickey Mouse, this black-and-white, hand-drawn theatrical short follows Mickey, his favorite gal pal Minnie Mouse and their friends Horace Horsecollar and Clarabelle Cow as they delight in a musical haywagon ride — until Peg-Leg Pete shows up and tries to run them off the road. This groundbreaking short from Walt Disney Animation Studios is directed by Lauren MacMullan (TV’s The Simpsons) and produced by Dorothy McKim (Prep & Landing trilogy, Meet the Robinsons), Get A Horse! opens in front of Frozen on November 27, 2013.

Disneytoon Studios’ The Pirate Fairy brought pixie dust to the festivities, unveiling the newest and most exciting adventure in the Disney Fairies franchise. Director Peggy Holmes (Secret of the Wings) introduced Christina Hendricks, who gives voice to Zarina, and Tom Hiddleston, tapped to voice a young James aka Captain Hook.

When a misunderstood dust-keeper fairy named Zarina steals Pixie Hollow’s all-important Blue Pixie Dust, and flies away to join forces with the pirates of Skull Rock, Tinker Bell and her fairy friends must embark on the adventure of a lifetime to return it to its rightful place. However, in the midst of their pursuit of Zarina, Tink’s world is turned upside down. She and her friends find that their respective talents have been switched and they have to race against time to retrieve the Blue Pixie Dust and return home to save Pixie Hollow. With comedy, heart, and epic thrills for the whole family, The Pirate Fairy sets sail Spring 2014.

Neff and Greer appeared on stage, alongside Hader, whose voice was also heard in Disney-Pixar’s Monsters University.

The Good Dinosaur asks the generations-old question: What if the cataclysmic asteroid that forever changed life on Earth actually missed the planet completely and giant dinosaurs never became extinct? In theaters May 30, 2014, the film is a humorous and exciting original story about Arlo, a lively 70-foot-tall teenage Apatosaurus with a big heart. After a traumatic event rattles Arlo’s tranquil community, he sets out on a quest to restore peace, gaining an unlikely companion along the way — a young human boy named Spot.

The crowd roared when their favorite monsters returned to the big screen as Disney-Pixar’s short Party Central scared up six minutes of fun at the D23 Expo. In the short, Mike and Sulley are back at Monsters University for a fun-filled weekend with their Oozma Kappa fraternity brothers. The gang is throwing their first party, but no one’s showing up. Luckily for them, Mike and Sulley have come up with a plan to make sure Party Central is the most epic party the school has ever seen. In theaters May 30, 2014, with The Good Dinosaur.

Disneytoon Studios’ Planes: Fire & Rescue landed on stage at the D23 Expo, welcoming Dane Cook, the voice of Dusty in Disney’s Planes, the action comedy adventure that landed in theaters today. Cook, who returns to voice the character in the follow-up, joined director Bobs Gannaway (Secret of the Wings) on stage. Julie Bowen was announced as the voice of Lil’ Dipper, and fans were treated to story details for Planes: Fire & Rescue, plus character images, concept art and footage from the film.

Planes: Fire & Rescue features a quirky crew of elite firefighting aircraft devoted to protecting historic Piston Peak National Park from a raging wildfire. When world famous air racer Dusty (voice of Cook) learns that his engine is damaged and he may never race again, he must shift gears and is launched into the world of wildfire air attack. Dusty joins forces with veteran fire and rescue helicopter Blade Ranger and his courageous air attack team, including spirited super scooper Lil’ Dipper (voice of Bowen), heavy-lift helicopter Windlifter, ex-military transport Cabbie and a lively bunch of brave all-terrain vehicles known as The Smokejumpers. Together, the fearless team battles a massive wildfire, and Dusty learns what it takes to become a true hero. Planes: Fire & Rescue ignites July 18, 2014.

Walt Disney Animation Studios’ Big Hero 6 hit the D23 Expo in style, welcoming director Don Hall (Winnie the Pooh) to the stage with a story presentation, including concept art and a sizzle piece designed to build excitement for the action comedy adventure.

Big Hero 6 features brilliant robotics prodigy Hiro Hamada, who finds himself in the grips of a criminal plot that threatens to destroy the fast-paced, high-tech city of San Fransokyo. With the help of his closest companion — a robot named Baymax — Hiro joins forces with a reluctant team of first-time crime fighters on a mission to save their city. Inspired by the Marvel comics of the same name, and featuring comic-book style action and all the heart and humor audiences expect from Walt Disney Animation Studios, the CG-animated Big Hero 6 hits theaters in 3D on November 7, 2014.

Legend of the NeverBeast

Disneytoon Studios director Steve Loter revealed plans for Legend of the NeverBeast, which takes the Disney Fairies on an epic action adventure that’s full of heart and edge-of-your-seat suspense. Fun and talented animal fairy Fawn believes you can’t judge a book by its cover — or an animal by its fangs — so she befriends a huge and mysterious creature known as the NeverBeast. While Tink and her friends aren’t so sure about this scary addition to Pixie Hollow, the elite Scout Fairies set out to capture the monster before he destroys their home. Fawn must trust her heart and take a leap of faith if she hopes to rally the girls to save the NeverBeast. Directed by Steve Loter, “Legend of the NeverBeast” roars to life in Spring 2015.

From director Pete Docter (Up, Monsters, Inc.) and producer Jonas Rivera (Up), Disney-Pixar’s Inside Out takes you to a place that everyone knows, but no one has ever seen: the world inside the human mind. Riley, an 11-year-old girl who recently moved with her family to San Francisco, is not the main character but the setting for the film. Moviegoers will go inside her mind to explore how memories are formed and how a mixture of five emotions — Joy, Disgust, Anger, Fear, and Sadness — defines life experiences. In theaters June 19, 2015.

The all-new big-screen adventure dives into theaters November 25, 2015, taking moviegoers back to the extraordinary underwater world from the original film. Finding Dory reunites the friendly-but-forgetful blue tang fish with her loved ones, and everyone learns a few things about the true meaning of family along the way.

Pixar fans also delighted in a surprise appearance by the studio’s “lucky charm” John Ratzenberger, who was ceremoniously paraded on stage by the Disneyland marching band. Ratzenberger joined Hader in a hilarious duel of one-upmanship over the multiple Pixar characters each has voiced.

Walt Disney Animation Studios’ director Byron Howard (Tangled) and writer Jared Bush shared plans for the upcoming comedy adventure Zootopia (working title). In the animal city of Zootopia, a fast-talking fox who’s trying to make it big goes on the run when he’s framed for a crime he didn’t commit. Zootopia’s top cop, a self-righteous rabbit, is hot on his tail, but when both become targets of a conspiracy, they’re forced to team up and discover even natural enemies can become best friends. In theaters in 2016.