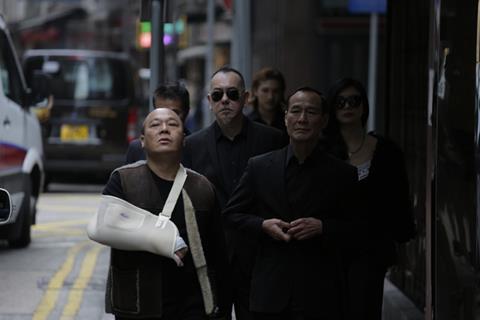 Less concerned with visual spectacle and action-orientated Hong Kong cinema, Gangster Pay Day is more focused on melodrama, with humour also thrown in, invoking a sense of nostalgia of sorts to the 1980s and 90s when the genre was more popular. With no guns in sight, it will naturally disappoint those searching for such an action-packed narrative, but it succeeds on its own terms in its compelling portrayal of the city in what is an entertaining and enchanting feature.

What Gangster Pay Day may lack in visual energy, it compensates with well-drawn out characters and the relationships they have with each other in an engaging setting.

Closing this year’s Busan International Film Festival, the subsequent media attention should aid the film in gaining some further exposure at festivals keen to programme Hong Kong cinema, while on the local front, the feature should at least have a curious and potentially warm welcome when it hits screens there in November.

The film centers around a triad boss, Wong Kam-kwei aka Ghost (Anthony Wong) who seems content just overseeing his businesses including bathhouses and a karaoke bar as his gang loses its influence. He soon begins developing feelings for a small teahouse owner, Mei (Charlene Choi), who has already fallen in love with one of Ghost’s gang members Leung (Wong Yau-nam) with whom he is very close to, and gracefully stands aside.

Circumstances, however, make it increasingly difficult for Ghost to remain uninvolved in the precarious conflict between a rival gang when they seek to steal his territory and in doing so, attempt to endanger those around him.

The film is largely predictable and formulaic, and yet despite its overly melodramatic tone that’s further accentuated by the film’s score, it retains its own charm throughout. This is in part to veteran actor Anthony Wong’s (Infernal Affairs) rather delightful performance as the almost always considerate boss. It’s his interactions with his minions and Wei that provide the film with its more humorous and touching moments.

Refusing to resort to the iconic Hong Kong’s city backdrop to compel viewers or even shoot much footage on the city streets, director and co-writer Lee Po Cheung (Single Blog) sets much it in enclosed spaces such as Mei’s teahouse thereby providing an interesting portrait of the city built on relationships between each of the main and supporting roles. It’s this chemistry that successfully drives the narrative forward giving it sufficient and consistent pacing.

Ultimately, what Gangster Pay Day may lack in visual energy, it compensates with well-drawn out characters and the relationships they have with each other in an engaging setting, and it’s these attributes that will help sell the film, especially to fans of earlier Hong Kong cinema.