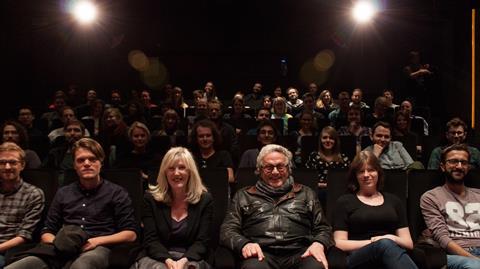 The film, which has taken nearly $375m at the worldwide box office since its release in May, stars Tom Hardy in the role first made famous by Mel Gibson over three movies from 1979-85.

Describing his vision of the film, Miller said: “At its inception, it was a film that was going to be an extended chase. I wanted to see how much character, story and subtext the audience could pick up without stopping for exposition.”

The filmmaker, who has also made family movies Babe: Pig in the City (1998) and Happy Feet (2006), recalled how he first wrote a treatment for the film in 1997, despite not wanting to return to the road warrior character.

“I never wanted to make a second Mad Max, let alone a fourth one,” said Miller. “But they live like imaginary characters in your head. I keep pushing them away because I want to tell other stories.

“In an unguarded moment, I was flying across the Pacific overnight from Los Angeles to Sydney, and this story played out in my head.”

That one-page treatment led Miller to work with graphic artist Brendan McCarthy and together they laid out the whole movie in storyboards, comprising 3,500 panels.

Unlike the original trilogy, which was shot on film, Miller shot Fury Road over 138 days in Namibia using digital cameras, from the high-end Arri Alexa M to more expendable Canon 5D’s.

He also made great use of digital technology to enhance his vision, in a way he could never have achieved in the early 1980s.

“I was drawn to cinema in the first place with a kind of curiosity,” stated Miller.

”Babe was right at the beginning of the digital dispensation - that we can make an animal talk.

“Andrew Leslie, who shot the Babe movies, went on to do Lord of the Rings and showed me the first motion capture of Gollum. So when it came to Happy Feet he said: “You can make the Penguins dance”.

“So to come back to Mad Max after three decades later, we can now erase tracks and skidmarks in the sand and can change the skies to make them uniform. I love the technology and it’s amazing what you can do.”

Miller, who recently confirmed that two further Mad Max scripts have been written, was in London promoting the home entertainment release of Mad Mad: Fury Road.