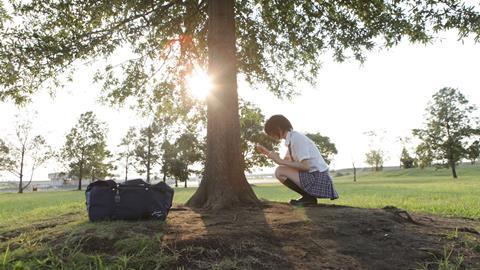 A freewheeling quirky art-house film that draws together bio art, body modification and domestic drama, GFP Bunny is an oddball mash-up of a movie that has a starting point of looking a Japanese teen starting poisoning her mother before spinning off to embrace the broader issues of genetic manipulation.

GFP Bunny is an intriguing made film, deliberately provocative and full of striking images and challenging concepts.

Writer/director Yukata Tsuchiya’s film – his first feature project since The New God in 1999 – had its premiere in the Japanese Eyes section of the Tokyo International Film Festival where it won best film – is resolutely art house and should appeal to other festivals (Rotterdam would seem a perfect fit) and may well intrigue niche distributors.

In 2005 Japan was shocked by the real-life case of a teenager’s attempt to poison her mother with thallium, and while the film dabbles around the edge replicating this story, the director uses this as a jumping off point to look at other interests of the girl (impressively played by Yuka Kuramochi), who is bullied at school, and who starts to see herself as a specimen in her own science experiments.

The girl observes and dissects various creatures and uploads images on her video diary. Through the Internet she learns about the latest technology in genetic engineering as well as ‘bio art’. Her mother (Makiko Watanabe) is obsessed with anti-aging remedies, but her daughter heads off to look for the difference between cosmetic surgery and genetic manipulation.

Her journey – which implicitly dwells on alienation in contemporary Japanese society – is set alongside interviews with various people who offer insight on parallel issues…they include a biologist who created a transparent frog and an artist who implants a chip with GPS into the palm of their hand.

GFP Bunny is an intriguing made film, deliberately provocative and full of striking images and challenging concepts. Yuka Kuramochi is striking as the girl who heads off on the oddest of journeys, while Takahashi – a body modification artist - makes a stunning impact towards the end of the film, especially when the pair head off into the night on a brightly lit scooter.