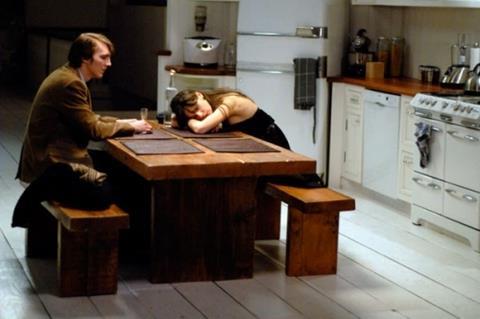 Aselton has acknowledged the influence of surrealists such as Luis Bunuel and David Lynch in his work, and Gigantic also suggests Charlie Kaufman’s off-kilter sensibility at times, moving towards Wes Anderson’s strained preciousness at others.

Brian Weathersby (Dano), is a 28-year-old New Yorker who works as a salesman at a high-end Swiss mattress company. He is also a quiet subversive whose uncertain professional ambition is transcended by a deep-seated desire to adopt and raise a Chinese baby. His life is thrown upside down by his developing attraction to Harriet Lolly (Deschanel). She’s the daughter of his top client (Goodman), an abrasively vulgar though oddly compelling businessman.

Brian’s world of adventure and possibility is continuously interrupted by the strange and unaccountably brutal homeless man (Galifianakis) who is violently stalking him. Aselton’s background is in commercials and he shows a strong visual command here. In collaboration with the talented cinematographer Peter Donahue (Junebug), he reveals a flair for nocturnal imagery, like a sequence inside an indoor pool where the young lovers’ relationship hesitantly unfolds.

The director is also good with subjectivity and point of view, most impressively a haunting symphony of New York landscapes and architecture captured from the consciousness of Goodman’s character traversing the city in the back of a limousine.

Unfortunately his visual flourishes never quite compensate for a script that is insufficiently detailed and unsatisfactorily sketched with regard to characterisation, plotting and psychological depth. The script is burdened either by too many throwaway moments, or serious sequences which fail to come off, such as Harret’s peculiar phone conversation with her estranged mother. And the imposition of the homeless assassin on the story, further undermined by its unsatisfactory resolution, feels imported from a different film.

Like the movie, the central relationship is rife with possibilities. The two actors have some lovely, exquisite moments. But they needed more time to breathe and to provide some sort of emotional ballast to the uncertainty of the world around them.