eOne UK recorded its fifth number one as 3D comedy Gnomeo & Juliet supplanted Tangled at the top of the UK box office. 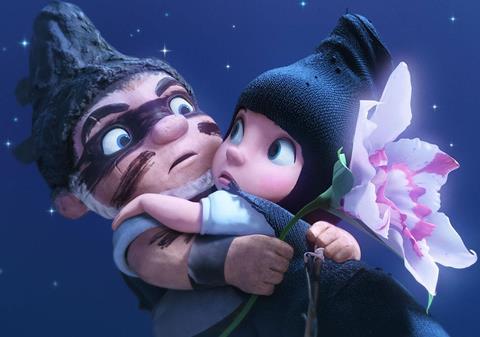 The animated reinterpretation of Shakespeare’s Romeo And Juliet, featuring the songs of Elton John, raked in a highly impressive $4.7m (£2.9m) from its 462 locations at a week-high average of $10,214 (£6,736) to chart top ahead of a crowded field, with eight of the week’s top ten all grossing over $1.6m (£1m) for the first time in chart history.

The result was eOne UK’s fifth number one in just over two years of UK distribution and also ranks as their third highest opening weekend ever at the UK box office, behind the previous two instalments of The Twilight Saga - New Moon ($18.7m/£11.7m) and Eclipse ($22.1m/£13.8m).

Last week’s number one, Tangled fell to third after suffering a 57% week-on-week drop. Disney’s fairytale was marginally behind BAFTA-winner The King’s Speech after adding $3.2m (£2m) to stand at $21.5m (£13.4m) overall.

Momentum’s The King’s Speech continues to captivate audiences as it recorded only a 28% drop in its sixth week to remain in second. The multi-award winner has now amassed $54.1m (£33.7m), surpassing Slumdog Millionaire’s tally of $50.8m (£31.7m) in the process.

With an expected boost to come from both its BAFTA wins and potential Oscar glory, it’s could still break into the top ten UK films of all time at the box office, even if Mamma Mia’s monumental $110.9m (£69.2m) haul as the biggest UK film of all time is seemingly insurmountable.

Yogi Bear and Just Go With It charted fifth and sixth respectively. Warner Bros’ 3D revamp of the much-loved Hanna-Barbera’s cartoon narrowly missed out on fourth after rustling up a respectable $2.9m (£1.8m); while Sony’s romantic-comedy grossed a decent $2.6m (£1.6m) despite showing in the top ten’s second lowest amount of locations (349).

The former’s take is unsurprising considering its relatively limited opening (265) and the lack of awards buzz that was originally expected for Mark Romanek’s romantic drama.