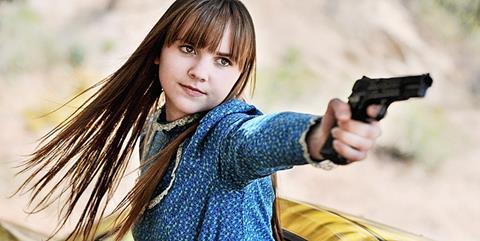 Not outrageous enough for true B-movie fans, but too outrageous for art-house audiences.

Never taking itself too seriously, the film follows a disgruntled 45-year-old man (Joel Murray), separated from his family, fired from his job, diagnosed with a terminal illness, and mad-as-hell with America¹s culture of stupidity, hatefulnesss and selfishness and doesn¹t want to take it anymore. “Why do we have a civilisation,” he says, concluding an angry tirade against hate radio and reality TV, “if we don¹t care about being civil anymore?”

At the end of his rope, Frank is finally propelled to take out his old army gun and seek retribution for what he sees as wrong with the U.S.A. His first target: a spoiled reality TV rich girl who screams at her parents for buying
her the wrong car.

After Frank¹s initial success ridding the planet of people “who deserve to die,” he finds a more-than-willing companion in Roxy (Tara Lynn Barr), a spirited alternative teenage girl who¹s thrilled with the prospect of killing off jocks, people who give high fives, women who call their breasts “the girls,” along with a whole litany of others.

In a funny bit of self-aware scriptwriting, the film evokes Juno, with its similarly loquacious adolescent, and takes a funny jab at screenwriter Diablo Cody. No one in pop culture, it seems, is safe from Goldthwait¹s crosshairs.

Frank and Roxy¹s self-righteous murder spree gets off to a rousing start in a movie theater. When a group of teens are talking on their cellphones during a Vietnam War documentary, Frank picks them off one by one to the darkly ironic sounds of the 1951 song It¹s Oh So Quiet on the soundtrack.The film builds to a gory showdown on the set of an American Idol-like TV programme.

Not as exploitive or nasty as it sounds, God Bless America actually has a much softer heart than its premise suggests. While an early fantas sequence‹in which Frank slaughters some annoying next door neighbors, including their screaming baby, may not be for the squeamish, the film¹s violence is never more than cartoonish.

And there¹s something knowingly silly about the fact that Frank and Roxy are committing repugnant actions
while claiming a kind of moral high ground. Goldthwait flirts with some romantic tension between Frank and Roxy, but smartly doesn¹t indulge the cliché.

In fact, the film becomes as much a sweet-natured exploration of their platonic friendship, and shared distaste for American culture, than a serious bloodbath. God Bless America could even be called restrained. In that way, the film might come across as a ‘tweener’ in the marketplace, not outrageous enough for true B-movie fans, but too outrageous for art-house audiences.

Still, with enough lively scenes, one-liners, a punchy, topical premise and a good cast‹with both Joel Murray, Bill¹s brother, and Lynn Barr as veritable discoveries God Bless America could do some limited business in the States, in particular, with a healthier life on VOD and DVD.