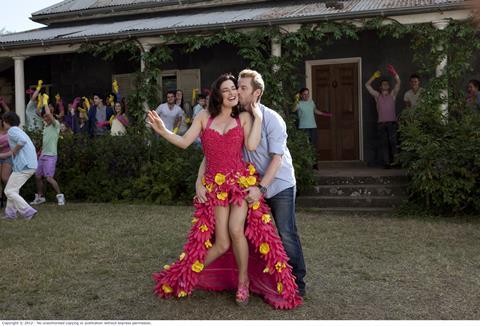 This Australian rom-com-with-songs has ambitions that go way beyond the one-woman cabaret show upon which it is based. But Goddess doesn’t have the structure or the firepower songs to make the full-scale musical that its production team seem to be after. It certainly has two attractive leads, some solid laughs and very handsome big-screen camerawork in rural Tasmania and around Sydney Harbour. Its biggest asset may be top-selling singer and current Australian The X Factor judge Ronan Keating who makes an impressive acting debut. The movie opens wide in Australia on March 14.

Laura Michelle Kelly, Mary Poppins in London’s West End and on Broadway, plays Elspeth Dickens, lonely housewife and mother of two hyperactive twin boys. They live in an idyllic country cottage while husband/father James (Keating) is off protecting whales in the southern ocean. A former professional entertainer, Elspeth composes songs on an upright in the picturesque barn, keeping to herself until local computer geek Neil (Cameron Lyon) fits her up with an internet connection. Soon she’s an updated Shirley Valentine who talks to her kitchen webcam rather than to her kitchen wall.

Increasing international popularity brings her to the attention of Cassandra Wolfe (Magda Szubanski), a bitchy mainland advertising boss who is looking for a personality to front the launch of the new Goddess laptop, aimed at women. Just as Elspeth flies to proffered fame in Sydney, James returns home to find a hired nanny at the cottage, and soon the online world is following both James in the kitchen and Elspeth in her ritzy hotel with panoramic views of – wouldn’t you know it? — Sydney’s bridge and opera house.

While the movie’s source material, Joanna Weinberg’s Sinksongs, stayed in the kitchen with piano backing, here director and co-screenplay-writer Lamprell has greatly expanded the scope. Elspeth’s songs now get a full band backing, plus choreography and slick music-video editing. Other characters get songs, too. Szubanski’s number — a Marilyn Monroe strut with multiple male dancers — is a hoot, but the central idea of Elspeth’s solo reaching-out is here less affective or believable.