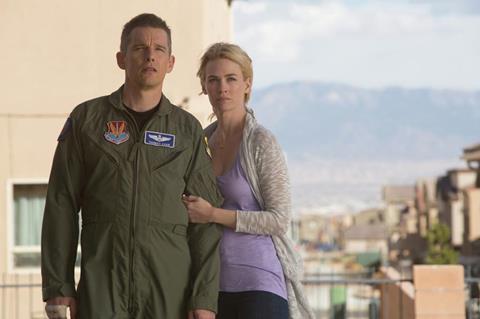 The guilty conscience of America gets a Hollywood workout in this worthy but plodding Andrew Niccol drama about a stressed-out US air force pilot turned military video-gamer – his job now being to carry out remote drone strikes in Afghanistan from the comfort of a Nevada military base. The film stars Ethan Hawke and every for-and-against argument you’ve ever heard about the collateral damage caused by America’s technology-delegated war on terror, spoken by characters who seem created for this express purpose.

The flight-simulator adrenalin of the strikes that take up much of the action will perhaps extend Good Kill’s box office appeal.

There’s a definite topicality in a film that received its Venice premiere on the same day US secretary of state John Kerry announced the creation of a 10-nation coalition to fight ISIS – with “no boots on the ground”.

It’s just a shame that the regulation-issue script goes through the motions in such an obvious way, providing Hawke’s increasingly embittered and worn-down rocket-firing major with a hot young wife so his marriage can suffer, a feisty operations-room ‘co-pilot’ (Zoe Kravitz) to speak his conscience and provide some romantic frisson, and a whole supporting cast of innocent Google-Earth-view Afghan women, kids and minibuses whose main role seems to be to stray into target range in the ten seconds between missile launch and explosion.

The flight-simulator adrenalin of the strikes that take up much of the action will perhaps extend Good Kill’s box office appeal, but mostly this looks like a mid-table, short-shelf-life release that is unlikely to surgically target the Academy Awards.

It moves along briskly enough, and Hawke’s committed, unshowy lead performance goes some way towards keeping things real. Perhaps the most interesting aspect of the whole exercise is the juxtaposition between the Afghan desertscapes Hawke’s Major Tommy Egan flies remotely over every day and the suburban desert he lives in with his pretty young wife Molly (Mad Men’s January Jones) where just-built, standard issue houses with their lawns, sprinklers and barbecue parties are separated by a thin fence from the wilderness beyond.

Aerial shots clinch the parallel – while the neon stridency of Vegas, with its fake world monuments, stands in for the madness of the virtual world Tommy lives in for half of every day. It’s in these scene-bridging placing shots that we glimpse, briefly, the Niccol who scripted The Truman Show.

Set in 2010 during what an opening caption informs was “the greatest escalation in targeted drone killings”, the film takes us straight into the control room – later revealed to be an air-conditioned container on a desert military base – where Tommy and the other three members of his crew survey targets, launch air strikes and count bodies afterwards.

During strikes we see what Tommy sees, his console screen filling the cinema screen complete with GPS coordinates and target crosshairs. The first kill is, naturally, uncomplicated: Tommy takes out six Taliban terrorists and heads home to that standard-issue house with standard-issue sexy wife and sweet kids. But all is not well, we realise, when that night in bed, even January Jones in a skimpy silk nightie cannot get her man’s attention.

What Tommy really wants is to go back to being a real Top Gun in a real plane, but though sympathetic, his rugged commanding officer Jack Johns (Greenwood) tells him he’s more useful as a drone pilot. It’s true that USAF now trains more UAV (drone) pilots than jet fighter pilots, and scraps of dialogue helpfully fill us on other Wikipedia points: that the software system used to launch strikes was modeled on X-Box, and that many UAV pilots are gamers.

The focus, though, is very much on the havoc his schizophrenic double life wreaks on Tommy’s mental health, and this is the weakest part of a film that deploys cliché after cliché in its wracking up of the pressure. Tommy’s sex life is shot, he secretly takes to the bottle, gets moody with Molly, and if it weren’t for a sympathetic Vietnam-vet traffic cop he’d be done for drink driving.

And while one of the drone strikes is genuinely shocking – when after taking out a presumed terrorist cell, Tommy is ordered to take out the funeral that follows – Good Kill’s staging of the ethical debate tries to have its cake and eat it, reassuring all right-thinking liberal Americans by delegating the most questionable orders to a disembodied voice from CIA headquarters in Langley, Virginia.

In a script that labours its points, there’s only one truly spot on line of dialogue: when that heart-of-gold traffic cop asks Tommy how the war on terror’s going, he replies, in a weary voice, “kind of like the war on drugs”.