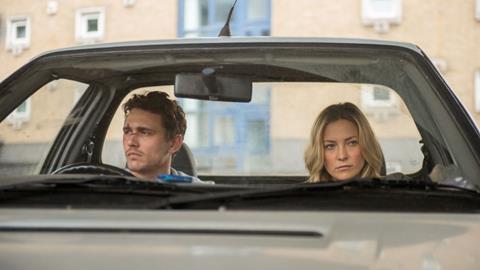 “Good thing I have a master’s degree — it comes in handy,” says James Franco’s character in Good People. It’s meant as a sarcastic rejoinder to the fading fortunes of his downsized, down-on-his-luck landscape designer, but it tracks as a reminder of the fallback benefits of the actor’s offscreen formal education — and the accrued goodwill of a filmography stocked with much more interesting fare.

Franco and Hudson more or less acquit themselves, dutifully expressing the required emotion but going to no great effort to breathe dimensionality into their paperboard characters.

Franco is but one of an unusually grouped quartet of recognisable actors who slog their way through cut-rate material in this plodding, personality-free crime thriller. Mindless and mechanical until it suddenly decides to abandon any pretense of sense in a pulpy third act that hints in the faintest fashion at the deranged fun the film could have been, Danish director Henrik Ruben Genz’s English-language debut is a creatively stillborn dud. Despite its name cast, poor word-of-mouth should sink any box office prospects, and quickly relegate it to a life of cable television anonymity.

Set in London, the film opens on a robbery double-cross that aims to inject some measure of edge or excitement into proceedings but is largely irrelevant to the main story, which centers around an American ex-pat, Tom Wright (Franco), and his wife Anne (Kate Hudson), who’ve moved to Great Britain to fix up an inherited house and escape memories of a miscarriage. (This raises the question of what sort of house bequeathed in an estate is in such disrepair that no one can live in it, but it’s best to try not to think about the movie’s various inanities.)

Cash-poor and having received the obligatory two-week eviction notice, the Wrights are also trying without much success to start a family when the tenant renting a room downstairs drops dead from a drug overdose. Tom discovers a bag of cash with around $400,000. After he and Anne make an impulsive decision to hold onto it and not report it to police, they find themselves on the receiving end of questions from Detective Inspector John Halden (Tom Wilkinson), whose doggedness stems from a dead daughter who herself was the victim of tainted heroin. More problematic, however, is the attention of two drug-peddling thugs interested in the money — the scummy Jack Witkowski (Sam Spruell) and a more refined higher-up who refers to himself as Genghis Khan (Omar Sy).

Adapting Marcus Sakey’s novel of the same name, screenwriter Kelly Masterson punches through an utterly inane set-up without much aplomb, offering up thin characterisations and leaning on tired, cliched representations of conflict (a police captain admonishes Halden, saying “I told you to drop it!”) that viewers have seen many times before. Worse, as the movie progresses, the dialogue seems to consist largely of lines that Masterson thinks represent dramatic engagement (e.g., “The money is the only thing keeping us alive right now!”) but mainly serve to reinforce problems with the believability of these interactions.

Paradoxically, where Good People most jolts one to attention and also falls apart is in its third act. After a confrontation with and beat-down at the hands of Jack and then a menacing meeting with Genghis Khan, Tom arranges for a public meeting to return the money. When that goes sideways, he and Anne hole up in his grandmother’s old, under-construction home and text their address to Jack. The last 15 to 18 minutes, then, essentially becomes an odd, sprawling, multi-character home invasion film. If the movie had arrived at this point earlier or even just used it as a means to showcase Tom’s heretofore dormant inventiveness, it might be halfway intriguing. Instead, the full stupidity of this gambit is revealed, but without any actual dark consequences.

Visually, with its meticulously depressed blue-green palette, courtesy of cinematographer Jorgen Johansson, Good People resembles the hypothetical cinematic offspring of a kitchen-sink drama and a car commercial gone to seed. There’s no nuanced differentiation to the environments of its characters.

Wilkinson classes things up a bit with a characteristic emotional remove. And Franco and Hudson more or less acquit themselves, dutifully expressing the required emotion but going to no great effort to breathe dimensionality into their paperboard characters. There’s nothing about these People or their problems, in short, that is particularly interesting or memorable.

Screenplay: Kelly Masterson, based on the novel by Marcus Sakey