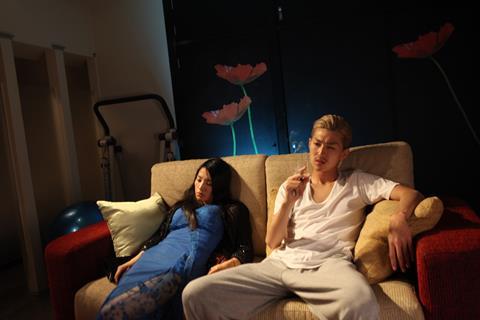 The stylishly bloody and brutal Japanese street gang film Hard Romanticker is a knowing hark back to the days when production company Toei was a local box office leader making successful youth gang films. This new variation on the theme features a stunning lead performance by Shota Matsuda as the bleach-blond street tough who lives on the edge and is always happy to engage in a little ultra-violence.

Shota Matsuda is a charismatic lead – cool, stylish and brooding – and is the dynamic core of this freewheeling and tough crime drama.

The on-screen violence is tough and bloody but never gory, and director Gu Su-yeon’s impressive film does a great job in portraying a Japanese town brimming over with sex, violence, drugs and gang warfare as nihilistic loner Gu (Matsuda) causes turmoil and desire for revenge. The film is based on Gu Su-yeon’s 2001 debut novel of the same name.

Like the director (who sports the same name and favours a similar blond hairstyle) the lead character of Gu is Japanese born, but of Korean ancestry, from Shimonoseki, Yamaguchi Prefecture, a port town surrounded by sea on the tip of Honshu Island.

The fictional Gu. Though, is a tough loner working at a series of part time job and riding round the town on his scooter, constantly getting into gang trouble, but never shirking a fight. He is entrusted with a key to a secret stash by childhood acquaintance Shoji, a member of the Gono yakuza gang; constantly runs into tough local detective Fujita; and tries to find out why old friend Tatsu lead a raid on a rival’s house, ending up beating an old woman to death.

Along the way Gu secures a job as a manager of a sophisticated club, but can’t stop getting into trouble. He ends up upsetting pretty much all of the Shimonoseki gangs, and with them all on his trail he is heading to a violent showdown (an impressively shot) as Gu, wielding an iron bar, has to face off against hordes of bloodthirsty youths.

Shota Matsuda is a charismatic lead – cool, stylish and brooding – and is the dynamic core of this freewheeling and tough crime drama. Hard Romanticker – the title means nothing specifically, except that it merges ‘romance’ and ‘kicker’ presumably, and simply implies romance and violence – is an enjoyably tough film with no real moral message…simply a cool updating of the gang film genre. The film screened at the Tokyo International Film Festival.

Screenplay: Mitsunori Gu, based on a novel by Gu Su-yeon