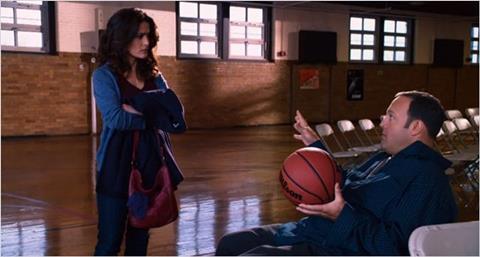 If the key to girl-next-door romantic comedy appeal is said to lie in an actress’ aspirational qualities, then the same is true of another subset of comedy embodied by Kevin James, whose stocky physicality but surprising grace with it feed an affable, self-effacing demeanor that serves as a pleasantly embraceable stand-in for legions of weekend warriors with anecdotes of past athletic glory and romantic prowess. Conventionally plotted but bighearted, crowd-pleasing teacher-turned-fighter tale Here Comes The Boom serves as James’ most well-rounded starring vehicle to date.

James, who starred for nine seasons on the American sitcom The King of Queens, has more successfully located a pivot point into feature films from the small screen than many of his predecessors in patriarchal domestic comedy, like Tim Allen and Ray Romano.

In 2009, James’ modestly budgeted Paul Blart: Mall Cop was a huge surprise success, recouping its production outlay in its opening weekend en route to a $146 million domestic (and $183 million overall) theatrical gross. Last year’s Zookeeper, while grossing $170 million worldwide, roughly split its box office take between the United States and international markets, perhaps getting lost a bit in the summer shuffle. The PG-rated Boom could easily improve on those totals, winning over family film and MMA fans while also tapping into significant foreign markets.

When budget cutbacks threaten a Boston high school’s music program, and the job of its beloved instructor, Marty Streb (Henry Winkler), 42-year-old biology teacher Scott Voss (James) takes it upon himself to raise enough cash to save the day. It doesn’t hurt, of course, that the school nurse upon whom he has a crush, Bella Flores (Salma Hayek), thinks this is a wonderful thing.

At first Scott starts teaching citizenship night school classes but, needing more money, he quickly turns to moonlighting as a mixed martial arts fighter, accepting training from Niko (Bas Rutten), a Danish immigrant and onetime brawler. Drawing upon his past experience as a college wrestler, Scott’s initial plan is simply to hit the underground circuit and rack up enough paydays by protecting himself and losing honorably. Things change, however, when he gets a big shot at UFC league match.

James, who starred for nine seasons on the American sitcom The King of Queens, has more successfully located a pivot point into feature films from the small screen than many of his predecessors in patriarchal domestic comedy, like Tim Allen and Ray Romano. He’s retained a certain oafishness, but leavened it with blue-collar humility. In movies, James has been adopted into the tight-knit clan of Adam Sandler (who exec-produces here), and exhibits the same penchant for surrounding himself with friends and family. His brother, Gary Valentine, co-stars in Boom, and Rutten is also a longtime pal.

The script, by James and Allan Loeb, is more structured than many of Sandler’s backslapping efforts, though. It bears signs of some awkward trimming of subplots around the edges — after a follow-your-dream speech by Scott, his brother Eric (Valentine) pops up as a chef at a restaurant owned by the needy father of a pupil — and other bits don’t match, too. When Bella talks about the spirit of the school improving so drastically, for instance, it’s hard to recognize what she’s talking about, since only she, Scott and Marty seem to be doing anything. Still, while its beats may be familiar, they are colorfully filled in, and certainly elevated by a game cast.

Director Frank Coraci oversees a mostly modest and unassuming technical package; its only moment of flashiness lies in the imaginatively shot first round of Scott’s big UFC bout, which uses handheld camerawork to impart a catchy subjectivity.

James is the star of Boom, and he showcases an appealing blend of goofy charm and put-upon Everymanness. His penchant for slapstick tidbits helps the movie skew young (eight- to 14-year-olds), but doesn’t outweigh the film’s earnest emotional connection.

As a student of Scott’s, Clarice makes a nice impression, and veteran Winkler is afforded some nice moments. But it’s the gruffly charismatic Rutten who grabs the belt for standout supporting performance, providing a larger-than-life sidekick to James’ straight man.

The film’s music is also notable. Composer Rupert Gregson-Williams’ score hits all the right notes during its cathartic finale. Meanwhile, hard rock group P.O.D.’s boisterous “Boom” gives the movie its title, and is frequently invoked, but in an unlikely twist so is Neil Diamond’s “Holly Holy.”