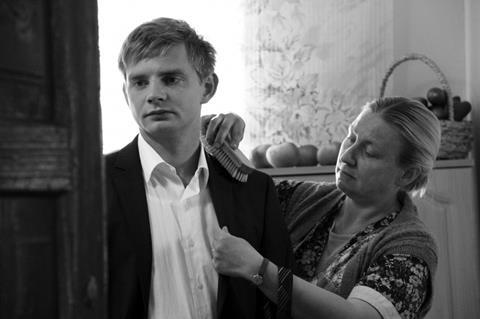 Andrzej Baranski’s composite portrait of rural Eastern Poland, put together out of short stories by Zbigniew Masternak, is such a harsh and unforgiving indictment of his countrymen that even the Polish cinema, well known for its auto-critical tendencies, has rarely indulged in. Poverty, sloth, alcoholism, religious bigotry, mutual deceit, simple-minded and self-destructive despondency are piled one upon the other in this hodge-podge of incidents barely tied together by the character of a hopeless loser who fails at everything he half-heartedly attempts.

Veteran director Baranski constantly pushes his cast towards the grotesque and ridiculous.

Shot in black-and-white, which is about par for the course given Baranski’s bleak vision of the world, the main obstacle for Heritage (Ksiestwo) may ultimately be the utter dislike of its author for his hero, which defuses whatever sense of sympathy the film ever strived for. The film screened in competition at the Karlovy Vary Film Festival.

Raised by a half-drunk, dreamer of a father, who told him he is the scion of a noble family brought down by the association of its menfolk with common women, Zbyszek (played as an adult by Rafal Zawierucha) grows up feeling he has to escape the dearth of his native village, go to town and restore his glorious dynasty. Once his brief soccer career is cut off by one of his team mates who breaks his leg out of sheer spite and jealousy, he leaves his widowed mother alone to work the fields and goes to study law in Lublin.

After three years of loafing aimlessly, he is kicked out of University, without her knowledge, and from this low beginning point he goes all the way down, associating with criminal elements, then going back to the village to join his old good-for-nothing cronies in their discotheque brawls, pretending to study to avoid strenuous effort of any kind, always around events but never really at their center, constantly pretending to be something he isn’t.

He gradually discovers he has no talents and no qualities, he has no goals to achieve, not even dreams to motivate his existence, with every passing day he becomes more and more conscious of his uselessness. He isn’t even a real survivor and the ending is there to prove it.

If the events provided by the script are not enough to damn Zbyszek, who is evidently a metaphoric figure, every single character around him in the village seems to confirm the appalling state of that part of the country. The plot, a string of disparate scenes with hardly any continuity keeping them together, is intent on observing all this with a kind of sarcastic glee, as veteran director Baranski constantly pushes his cast towards the grotesque and ridiculous.

The musical score is overbearing, hectic camera movements cannot dissimulate the visually conventional approach and a more frequent use of the editor’s scissors would have helped immensely the picture, which now runs over two hours. As for Zawierucha, who is practically never off the screen, his character lacks the ambivalence which would have made it actually interesting. Zbyszek, as played by him, is the kind of person you’d never choose to spend any time with, which makes every one of the few compliments he is paid in the course of the film, sound ludicrous and manipulative.

Screenplay: Andrzej Baranski, based on short stories by Zbigniew Masternak