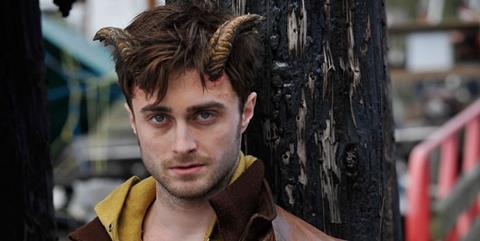 An uneven supernatural-thriller-drama mishmash, French filmmaker Alexandre Aja’s latest slickly produced English-language film suffers from several inherent flaws. For the most part, Horns can’t decide what it wants to be, whether genuine story of innocence lost, crude comedy or gory horror flick. Straddling all these different genres may have pushed the movie into the Toronto International Film Festival’s more experimental Vanguard section, but the tonal shifts make for a film that’s less avant-garde and more simply all-over-the-place.

Radcliffe’s manic portrayal of Ig doesn’t help the histrionic nature of the script.

With a recognisable cast, lead by Harry Potter’s Daniel Radcliffe all grown up, strung-out and pasty-faced, as well as Juno Temple and Max Minghella, Horns has enough names and marketable special-effects elements to have some potential commercial appeal. But outside of fantasy festivals and midnight slots, this is not a movie that belongs in cinemas, but is more apt for downloads and DVDs.

Horns begins on familiar territory: Ig Perrish (Radcliffe), a young man living in a small mill town in Washington State, is the lead suspect in his longtime girlfriend’s murder. But while setting out to prove his innocence, something weird happens: One morning, he discovers large devilish horns growing out of his head, and with them, a strange power that makes everyone around him reveal their cruelest thoughts and act on their most libidinous desires. Ig’s doctor screws his nurse; his parents tell Ig they just want him to go away; a policeman admits to lusting after his male partner.

Though these true confessions help Ig in his quest to find the true identity of his girlfriend’s killer, the gimmick wears thin. Furthermore, first-time feature screenwriter Keith Bunin doesn’t make clear the rules he’s set up for the horns. They appear to work on different people in different ways. And it’s never clear why Ig develops the horns in the first place. If he’s innocent, why does he become a devil? If he’s a fallen angel, he’s done nothing to make him fall in the first place.

To help explain at least some of the character’s backstories and conflicts, there’s an overlong flashback that takes place when they’re teenagers. But these scenes are awkward and obvious, particularly the unearned sentiment between Ig and his first love Merrin (who grows up to be Juno Temple, later baring all for one gratuitous sex scene in a tree house).

Radcliffe’s manic portrayal of Ig doesn’t help the histrionic nature of the script. Meanwhile, Temple plays the girlfriend Merrin with a mix of fragility and hotness, while Heather Graham shows up briefly hamming it up as a fame-hungry waitress. Max Minghella surprises with his even-keeled portrayal of Ig’s best friend and legal defender; he’s one of the few actors who is anchored in an emotional reality amid the film’s preposterous universe.

Veteran actor David Morse also delivers a credibly anguished performance as Merrin’s father, a long-suffering man who has not only lost his daughter, but his wife to cancer.  Morse’s strong performance offers an indication of what’s wrong with Horns. Hidden somewhere inside this film filled with raging fires, slithering snakes and freaky mind-games is a somber drama about loss.

The movie opens with a quote from Milton’s Paradise Lost, no less, “Awake, arise, or forever be fallen.” That’s a fairly highfalutin source to draw from, and Aja and Bunin do attempt to inject some serious commentary about sin and salvation within the proceedings, but there’s too much other clumsy stuff mucking it up—from bloated sound cues (blasting Depeche Mode’s Personal Jesus) to overindulgent visual effects (a nightmarish drug trip in which a character is buried alive. It’s cool, but why?)

Technically, those effects are handled with top-notch precision; CGI snakes provide one of the film’s few purely effective horror-film moments and a climactic finale offers fascinating images of a flaming creature.