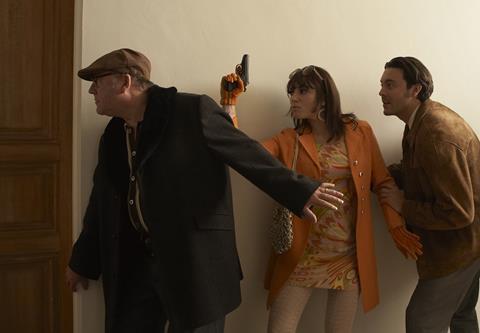 Synopsis: Set in 1969, the film centres around two East End guys who accidentally find a stash of weapons-grade uranium and try to sell it.

Producer: Tim Lewiston for his company Wardour Pictures, together with Alan Latham and line producer Rob How.

Filming location: In and around London, Belgium, Rome.

Tim Lewiston’s 60’s set feature about two friends who get involved in a series of scrapes across Europe after finding themeslves with a stash of Uranium may sound far fetched, but the script is actually based  on a true story.

“I was approached by the real main character who told me his story. Initally, I didn’t take it very seriously, but I went to see him and the story grew on me,” says Lewiston who has written the script and is producing the feature for his London based production company Wardour Pictures. “So I fleshed it out, added a few girls to the story and made it into a movie.”

With a background in post production and producing, Lewiston wasn’t necessarily the obvious choice to direct the feature, but he decided to step up to the challenge. “I’ve always writen scripts, but I decided fairly early on that I wanted to direct it .A few eyebrows leapt up, but no one said I couldn’t! It’s what I’ve always wanted to do since I joined the industry,” says Lewiston.

With father and daughter Ray and Lois Winstone starring in the film, nepotism had a hand in the casting, although not the way round you might expect.”I cast Lois first. I didn’t think about Ray initially, but he kind of crept into my mind because of Lois, and the more I worked on the script, the more I saw the two main characters as an older/younger brother kind of relationship. So I showed him the script and luckily he fell in love with it,” says Lewiston, who cast rising star Jack Huston, currently starring in Martin Scorsese’s Boadwalk Empire and part of the Huston dynasty, as his sidekick.

Despite the challenges that come with shooting a period piece, Lewiston was determined to set the film in 1969, when the real story took place. “There are certain stories that you can’t update. And I wanted it to be in that time, because it was such a great time. The world was a much simpler place with more straightforward people,” says Lewiston. “It’s a bit of a homage to great moveis of that time like The Italian Job and Get Carter.”

But, admits Lewiston, it has made life harder on the shoot. “The costumes, the vehicles, everything has to be right. And you have to clear everything, because you can’t have anything modern in sight. It takes time and money, but hopefully, the end results show it.”

The film is funded partly through private individuals via the EIS Scheme, as well as benefitting from both the tax credit in the UK and in Belgium (through financing company U-Media) where much of the film was shot. “We found some brilliant locations in Belgium..in Ghent, Brussels, Antwerp. In Leuven for instance, we found a fabulous location which doubled up for the interior of the Vatican.”

With Locomotive Pictures onboard to sell the film internationally, does Lewiston think the film will have global appeal? “It’s not what you’d call a Brit flick because it’s not all set in the backstreets of the East End of London..most of it takes place in Europe..Belgium, Rome and Luxembourg. So I’m hopeful it will.”

Next up: Lewiston is developing his next feature, Cheltenham, about a group of characters having financial problems, who are all connected by their dodgy accountant. “I like character driven pieces, which don’t rely on expensive CGI to make them watchable.”