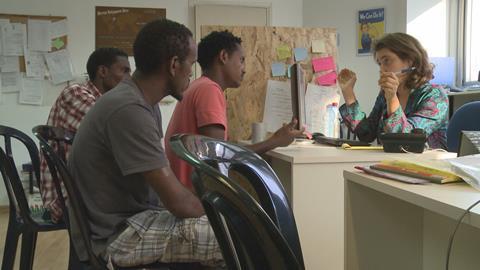 Coolly executed, but intensely charged in political terms, Silvina Landsmann’s documentary Hotline is not merely revealing but downright shocking in what it conveys about Israel’s policies on outsiders. The film studies Tel Aviv-based human rights organisation Hotline for Refugees and Migrants, and follows the work of the NGO and its allies in improving conditions for arrivals from Africa who find themselves without homes, work or rights, or indeed imprisoned.

Landsmann eschews both editorial voice-over and interviews, although at certain moments, people on screen may be exchanging information specifically for the viewer’s benefit.

Taking a non-editorialising approach, Landsmann doesn’t force an artificial narrative onto her material, but adopts a detached observational stance that pays off to compelling effect. Occasional repetitive stretches and a density of hard information for viewers to absorb may mitigate theatrical potential, but specialist documentary buyers will gravitate to it, not least for online and TV; needless to say, it’s a must for festivals and human rights events.

Argentinian-born Israeli film-maker Landsmann, whose documentaries include 2012’s Soldier/Citizen, focuses here on the plight of migrants and refugees to Israel from African countries including Eritrea and Sudan. Among the facts revealed is that there are 60,000 asylum seekers in Israel, but that full refugee status with rights has rarely been granted, and that Israel habitually deports refugees in violation of UN conventions. As we see, African refugees - as well as people seeking work rather than fleeing danger at home – are considered an unwelcome inconvenience by Israeli laws, which classify them as ‘infiltrators’, with new arrivals routinely jailed.

Landsmann does not choose to spin a narrative to engage us, nor to foreground characters for us to follow. Rather, operating her own camera, she films the work of the Hotline staff in general, illuminating the obstacles they are combating. Nevertheless, a number of figures emerge strongly, notably lawyer Asaf Weitzen and coordinator Sigal Rozen. An extended early sequence of Rozen addressing a hostile public is the film’s most startling sequence, as she cool-headedly parlays with an agitated audience raging against the influx of refugees into South Tel Aviv.

There are also extended sequences showing a hearing at Israel’s parliament building the Knesset, at which Hotline representatives state their case. Such moments in the film allow the material to breathe and to present itself without rhetoric on Landsmann’s part; in this sense Hotline comes close both to Frederick Wiseman and to some of Kim Longinotto’s films about individuals facing administrative systems. Another revealing sequence, played out largely in off-screen dialogue, has Weitzen facing bureaucratic indifference when he tries to ensure the release of a woman from prison, where many migrants wind up as a matter of course.

Landsmann eschews both editorial voice-over and interviews, although at certain moments, people on screen may be exchanging information specifically for the viewer’s benefit. She chooses not to focus on refugees’ individual stories, but to give a lucid overview of the iniquities of the system. Nevertheless, scenes at Hotline’s office show the conditions that migrants face: one man voices the view of many when he says that his situation in Israel is so bad that he would rather return to his native Ghana, despite the danger he faces there.

Amid the vast amount of information that we are asked to absorb, two visual images stand out to make it clear just what Hotline is fighting for: the closing shot of an African woman with her young child, and the Biblical quotation on a Hotline T-shirt: “You shall not oppress a stranger, for you were a stranger in the land of Egypt.”