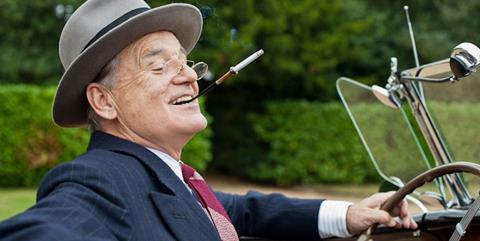 The swirl of expectation and trepidation surrounding the vital first meeting between President Franklin D. Roosevelt and King George VI is transformed into an entertaining, sweetly sentimental period piece in Hyde Park On Hudson. A jaunty crowdpleaser that lifts the curtain on the private moments of public figures, it combines an easy charm with a sly wit and some finely judged performances.

Bill Murray doesn’t lose himself within the character of FDR but he does invest him with a boundless charm that can smooth the way through any tricky situation.

An attractive proposition in its own right, the film should also reach a segment of The King’s Speech audience keen for a second helping of royal intrigue. There may also be some awards season traction in critical support for Bill Murray’s central performance and those of the supporting players.

As the threat of global war became an increasing reality in 1930s Europe, the meeting between Roosevelt and the monarch was designed to cement Anglo-American relations. The weekend at Roosevelt’s upstate New York estate is largely seen through the eyes of Margaret ” Daisy” Suckley (Laura Linney).

Suckley was a distant cousin of the President and letters found after her death revealed the close intimacy that had flourished between them. Asked to distract Roosevelt from the heavy burdens of office, Daisy became his lover and part of a harem that appears to have been tolerated by his wife Eleanor (Olivia Williams) and kept hidden from the public. The true nature of Roosevelt’s womanising ways all becomes apparent to the naive, needy, Daisy the weekend that the King and Queen come to visit.

The delicate ebb and flow of the relationship between Daisy and Roosevelt may lie at the heart of Hyde Park On Hudson but the bond forged between Roosevelt and the King (Samuel West) is much more fun. The affable Roosevelt is charm personified as he puts the monarch at ease (” Stutter? What stutter?”) and encourages him with words of praise that he has rarely heard from anyone else.

A late-night, whisky-fuelled conversation between the two men provides some of the most delightful and endearing moments in the film. Any resemblance to what actually happened can only be pure speculation on the part of screenwriter Richard Nelson.

Tastefully executed, frequently amusing and just a little twee in places, Hyde Park On Hudson could easily be something made for HBO. The production design and cinematography are impeccable but the quality of the performances alone is enough to justify its theatrical status. Bill Murray doesn’t lose himself within the character of FDR but he does invest him with a boundless charm that can smooth the way through any tricky situation.

He captures some of the sing-song cadence of Roosevelt’s speech and generally leaves the impression that he would have been excellent company for any weekend.

Laura Linney makes the dowdy Daisy a wounded outsider, observing events through sad, awestruck eyes. Samuel West is impressive as King George, a man who grows in confidence under the warm glow of Roosevelt’s approval. The versatile Olivia Colman makes a splendid Queen Elizabeth, sailing through every difficulty with admirable sang froid and a rare talent for vacuous small talk.