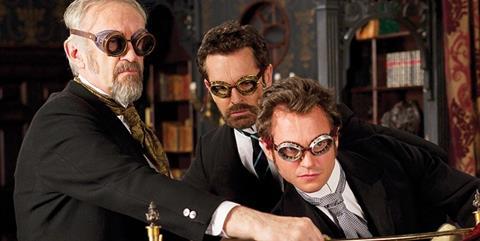 We may know exactly where Hysteria is heading but there is a good deal of fun to be had along the way.

Nicely paced and neatly told, Hysteria is jolly good fun. It could never be called cutting-edge but it has a sure populist touch and should hit the spot with a largely female audience who flocked to Calendar Girls and similar tales of female empowerment.

The story is set in Victorian England where naive, idealistic doctor Mortimer Granville (Hugh Dancy) has grown weary battling a medical establishment who fail to recognise the many scientific advances that are changing the world and making their old practices redundant.

He is only too happy to accept a position with Dr Robert Dalrymple (Jonathan Pryce), a pioneering specialist in the treatment of ” hysteria”, an all-purpose female complaint that he relieves with a vigorous dose of vulva massage. His waiting room is overflowing with eager patients.

As Mortimer grows increasingly exhausted and incapacitated (repetitive strain injury mostly) with servicing all these women, he develops the notion that there must be a mechanical means of achieving the same result. His friend and wealthy benefactor, gadget-loving Edmund (Rupert Everett) becomes his partner in creating the most amazing electronic device.

Mortimer’s professional endeavours are balanced with his romantic escapades. He is instantly drawn to Dalrymple’s bright, well-mannered daughter Emily (Felicity Jones) but has a more combative relationship with her feisty sister Charlotte (Maggie Gyllenhaal), a fearless activist for women’s rights who devotes herself to a settlement in London’s East End.

We may know exactly where Hysteria is heading but there is a good deal of fun to be had along the way. Director Tanya Wexler allows all the elements to breathe whilst ensuring a trim running time.  Smutty, double entendres are kept to a minimum as we are lightly drawn into the social of inequalities of the period and the burgeoning romance between Mortimer and Charlotte.

Maggie Gyllenhaal sports a very convincing English accent that makes her sound like Diana Rigg and offers a delightful performance full of energy and vitality. Hugh Dancy has the bumbling manner of a young Hugh Grant as he blusters and stammers towards the realisation of where his heart truly lies. The duo are surrounded by an able cast of reliable British performers with Rupert Everett adding to the drollery as the sly, eccentric Edmund.