Iceberg Slim: Portrait Of A Pimp 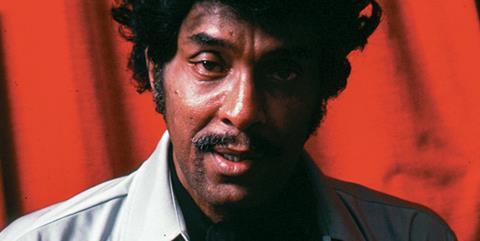 The title Portrait Of A Pimp is misleading. While the first half of first-time director Jorge Hinojosa’s look at the life of Robert Beck (a.k.a. “Iceberg Slim”) touches on his colorful life as a 1960s hustler, using and abusing women while dressed to the T in pinstripes and smart fedoras, the rest of the film concerns his rise as a sub-cultural literary icon. While the latter gives dimension and complexity to the film’s more sensationalistic early parts, it also lags, leaving several key questions about Beck’s later years unanswered.

If viewers aren’t familiar with Beck, Hinojosa sets up his importance with a litany of articulate fans, including director Bill Duke, Ice-T (an executive producer on the documentary), and comedian Chris Rock, who calls Beck’s iconic 1969 tome Pimp: The Story of My Life “maybe my favorite book of all time.”

The film charts Beck’s life, from an impoverished boy, sexually abused by his mother, to his brief rise as a charismatic pimp with a healthy stable of prostitutes, to his troubled years in and out of prisons, and finally, to his transformation as a legitimate author of widely read Street Lit. But Portrait of a Pimp is not exactly an inspirational story of redemption. If Beck made it good, the film suggests that his publishing house exploited him, his wife tossed him out of the house, and his work remained misunderstood as a valorization of pimping, not a critique.

Portrait of a Pimp suffers from the same confusion. With so much talk of “ho’s,” from the likes of Ice-T, Snoop Dogg and Caucasian academicians, it seems like an oversight that the filmmakers don’t relate the horrors that befell Beck’s prostitutes. The film samples liberally from a 1970s TV documentary in which a reformed, sometimes wild-eyed Beck discusses the Hell of a prostitute’s life and his regrets as a pimp (it also includes a brief awkward encounter with one of his former hookers). But there is nothing in Hinojosa’s contemporary footage that suggests this sensitivity or awareness.

At one point in the film, musician Henry Rollins flatteringly describes “Pimp: The Story of My Life” as “unrelentingly brutal,” but the film doesn’t convey the harsh circumstances that Beck endured—or perpetuated—in the ghetto. An African American critical studies professor provides an effective analogy, “Dope is the greatest pimp who ever lived; you’re the ‘ho’ and dope is pimping you.” But Beck’s confessions of addiction are brief and superficial.

Instead, Portrait of a Pimp employs evocative pulp fiction animation and motion graphics – of slickly dressed black men and scantily clad women – to convey Beck’s life in the ‘hood. It’s an inspired aesthetic choice, with the tabloid book-cover imagery that became synonymous with Beck’s literary output coming to life to illustrate his real-life journey. But such smooth retro-noir artistry doesn’t effectively paint the emotional turmoil of that experience.

When Beck goes clean, it adds a surprising twist to the story—and refreshingly, some female voices—his ex-wife and daughters—as additional narrators. But the pace of the film stalls with its new emphasis on the struggles of authors and publishers’ exploitation of their work. The film also raises—but never adequately addresses—the issue that Beck may not have given up his many vices.

With its iconic subject matter—as one expert in the film notes, “If prostitution is the oldest profession, pimping is the second oldest”—Iceberg Slim: Portrait Of A Pimp will certainly draw the curious, mostly on small screens. But the movie doesn’t deliver on the kind of titillation thrill-seekers might expect. And for those wanting a more penetrating account of the pimping life, the documentary spends more time celebrating Iceberg as a trailblazer than showing his faults. Moreover, the filmmakers can’t overcome the drawback of not being able to interview their primary subject (Beck died in 1992).