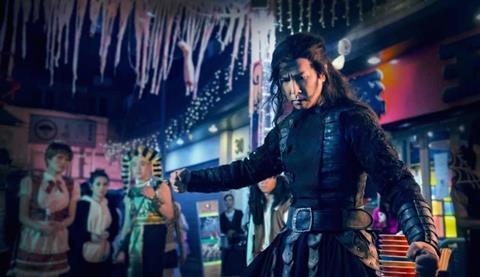 Law Wing Cheong’s ambitious attempt to remake Clarence Fok’s 1989 Hong Kong martial arts fantasy The Iceman Cometh is beset by multiple problems, from a patchy incoherent script, to jarring shifts in tone and genre, and sub-par action and effects sequences that even the star presence of Donnie Yen may find hard to reconcile.

While Hong Kong’s heyday regularly saw large scale action properties jump genres from comedy to romance to ultra violence and back again, the shifts in tone throughout Iceman prove jarring and betray a lack of coherence and clarity in the film’s vision.

The considerable star power of Yen (also the film’s action director) will doubtless attract domestic and international audiences to Iceman - shown in 3-D - but with precious few opportunities to showcase his talents, a narrative that frequently loses its footing, and effects that fall well shy of cutting edge, the results might take time to thaw. The production’s ballooning price tag likely fuelled the decision to cut Iceman in half and release it as two separate films, with the first part opening later this month and the second part due to hit screens at Christmas this year.

Essentially a Captain America-esque fish-out-of-water adventure cross-bred with a traditional period martial arts epic, Iceman sees Donnie Yen’s Ming Dynasty-era royal bodyguard He Ying woken from 400 years frozen in the ice, only to discover his enemies have followed him to the present day. Accused of colluding with Japanese pirates back in 1621, He Ying was stripped of his rank and sentenced to death, but fortuitously is buried in an avalanche alongside his childhood friends-turned would be assassins, Sao (Wang Baoqiang) and Niehu (Kang Yu).

In present day Hong Kong He Ying and meets down-on-her-luck nightclub hostess May (Eva Huang Shengyi), who agrees to take him in and plans to exploit him for the vast sums of gold ingots he has in his possession. Sao and Niehu fall in with a gang of Indian grifters, while corrupt Police Commissioner Cheung (Simon Yam) and shifty politician Tang (Lam Suet) look to reclaim the three frozen warriors and intend to sell them to the North Koreans. All three parties are also searching for the mystical Golden Wheel of Time, an ancient Indian device with the power to transport people through time.

Production on Iceman was beleaguered by numerous problems, not least failure to secure permission to film in a number of Hong Kong landmarks. This has resulted in the rather obvious use of sets doubling for the likes of the Lan Kwai Fong bar district and the Tsing Ma bridge, which detracts from the grounded street level aesthetic synonymous with Hong Kong action cinema, as well as escalating the film’s budget.

Law’s years of experience collaborating with Johnnie To are most evident during the film’s more conventional action beats, with a couple of finely-staged gunfights and car chases proving coherent and energetic. Conversely, the film’s more ambitious martial arts stand-offs, choreographed by Yen himself, lack immediacy or substance, with the climactic battle between Ying, Sao and Niehu proving over-reliant on CGI, instead of traditional fighting techniques. The film’s added third dimension is regularly exploited in these moments, as Ying’s large chain and Sao’s flying shield, surge repeatedly towards the camera, but elsewhere the 3D brings little to the production.

Rather than benefit the film’s pacing and clarity of storytelling, the two-part structure has left much of He Ying’s backstory unexplained, and seems strangely disinterested in exploring any of the characters’ struggles to adapt to 21st Century living. The final reel also becomes unnecessarily cluttered with revelations and temporal shifts, as Law and his writers attempt to set up their second chapter.

While Hong Kong’s heyday regularly saw large scale action properties jump genres from comedy to romance to ultra violence and back again, the shifts in tone throughout Iceman prove jarring and betray a lack of coherence and clarity in the film’s vision. Efforts to broach an earnest spiritual tone in many of the film’s flashbacks struggle to sit well alongside a proclivity for flatulence and toilet humour, while the sight of 17th Century soldiers snowboarding down a mountainside proves an anachronistic step too far.