I’d Receive The Worst News From Your Beautiful Lips 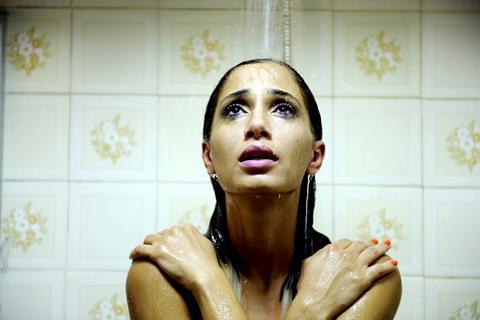 Steamy, sultry and unrepentantly melodramatic, the impressively executed (and bizarrely titled) new Brazilian film I’d Receive The Worst News From Your Beautiful Lips (Eu Receberia As Piores Noticias Dos Seus Lindos Labios) was one of the buzz titles of the Rio International Film Festival where it had its world premiere.

Beto Brant and Renato Ciasca bring just the right amount of steamy sexual tension to what is in essence an old-fashioned melodrama.

A love triangle set against a steamy Amazonian backdrop, the film is a glossily made film that veers between steamy sex and passion and revenge drama, though is distinctive mainly because of the sexually intense performance by Camila Pitanga as beautiful and unstable Lavinia, the woman caught between two men.

Adapted from Marcal Aquino’s novel, the film marks the eighth collaboration for co-directors Beto Brant and Renato Ciasca (whose films include 2007’s Stray Dog and 2009’s Love According To B. Schianberg), and could well be the film that attracts international attention. It offers little new dramatically, but is made with a style, mood and intensity that it could interest art house distributors.

I’d Receive The Worst News From Your Beautiful Lips sets its stall out right from the opening scenes of Lavinia naked and posing provocatively on a sandy river inlet. Photographer Cauby (Gustavo Machado) is an outsider travelling through the Amazon region, and currently living in a small town he obsessively thinks and dreams about the beautiful, charismatic and unpredictable Lavinia.

He decorates his shanty hut with pictures of Lavinia, but while she is enthusiastic in her affection and desire for him, she is also always determined to go back to her husband, the preacher Ernani (ZeCarlos Machado), who seemingly has a hold over his much younger wife.

The story then flashes back to a few years earlier to the city where addict Lavinia is introduced to Ernani and is determined to try and help the troubled and tormented young woman. The triangle between the three is set up in familiar fashion – Ernani believes he can heel through words and support; Cauby is driven by the images he creates and his desires, while Lavinia is torn between the two very different men.

The film – while beautifully shot and appropriately steamy – then takes a dive into melodrama territory and like any good soap opera tale the story twists and turns into murder, imprisonment, recrimination and the disappearance of Lavinia.

Camila Pitanga is striking as Lavinia, and is certainly called on to portray a woman in deep turmoil in the flashback scenes, though in the sequences of her sexual obsession with Cauby she is given little to do but take her clothes off and look at little concerned. But co-directors Beto Brant and Renato Ciasca make the most of their striking lead actress and bring just the right amount of steamy sexual tension to what is in essence an old-fashioned melodrama.