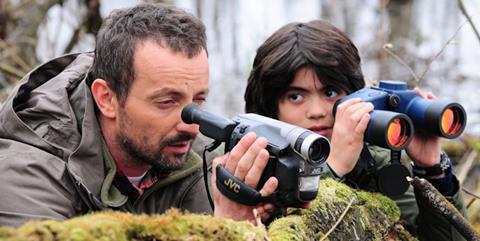 Engagingly made and rather old-fashioned in tone, Evheny Ruman’s feature debut Igor & The Cranes’ Journey (Igor VeMasa Ha’Agurim) is the tender tale of a young boy moved away from his home to a strange new country who equates his journey to that of the young cranes he and his ornithologist father watch over.

Director Evgeny Ruman clearly has an affinity for the subject, having emigrated from Russia to Israel at a young age, and does a fine job bringing out the best in his young cast.

Aimed at the under 10s, the film may well be a hard sell into certain territories, and while dubbing may assist sales a key aspect of the story is miscommunication between languages which might make it more complex. It could well be a fixture at youth orientated film festivals though.

Eleven-year-old Igor (Itai Shcherback) and his ornithologist father Peter (Tomasz Sobczak) witness the birth of a crane in the wilds of Russia, and Igor — who christens the young hatchling Karl — vows to watch over him. The migration of cranes from Eastern Europe to nesting grounds in Africa is a perilous journey, with more than half of the young cranes not surviving their first voyage, so Igor is mortified when his mother Tanya (Ola Schur Selektar) announces her plans to move to Israel Igor is mortified.

Though his parents are divorced he never imagined he would move so far from his father and the cranes. In anger Igor initially refuses all communication with his father once he arrives in Israel. He has difficulty adjusting to a new life, a new culture and language.

Unhappy at school, he turns to drawing pictures of his beloved cranes – which leads to a series of brief simple black-and white animated interludes as he imagines himself flying away like the cranes – and his drawings catch the eye of classmate Vered (Clil Arbel), who takes a shine to him. She shows Igor his father’s website which tracks the migration of Karl and the other cranes.

After Karl is separated from the flock, Igor is concerned that he won’t survive the lengthy trip to Africa alone, and so he rallies his classmates to help him build a small nesting ground to house the bird as he prepares to make his passage through Israel. When Karl goes missing, Igor and his estranged father, who is busy driving south to track the migration, join forces to find him, with the experience naturally enough bringing the two closer together.

t, with Itai Shcherback and Clil Arbel especially fine as the youngsters juggling tender emotions, with Arbel great as a young girl expressing affection for this boy more obsessed with cranes than with her. The story is a simple one as it juggles family, friendships and the environment, but it is also gently moving.