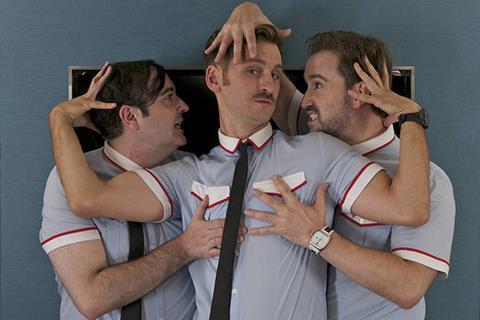 Camp, kitsch and deliciously entertaining, cult Spanish director Pedro Almodovar heads back to his wilder comedy roots with I’m So Excited!, a bright, breezy and frothy aircraft-set comedy that is strong on sex and sexuality and light on drama. The film opens in Spain today before international releases through the summer, and has the bold transgressive comedy moves to be a hit with savvy Almodovar-loving audiences.

I’m So Excited! is littered with hilariously over-the-top moments, and while some of the double-entendres may be lost in translation, the gloriously camp comedy often hits the sweet-spot.

After slightly darker material in more recent years, the film harks back to the Almodovar of Pepi, Luci, Bom (1980) and Women On The Verge Of A Nervous Breakdown (1987), and while there are some comments on Spain’s current political and social situation in amidst the sexual shenanigans, I’m So Excited! is a deliberately broad and bold sexual comedy.

Though on the surface it has the cheap-and-cheerful look of a camp aircraft attendant comedy (particularly the UK series The High Life, or a gayer variation of Pan Am), Almodovar packs his film with delightfully over-the-top performances all working from a tight and witty script, and pushes the comedy concept as far as he can,

He also manages to – briefly – find some room for Spanish icons Antonio Banderas (an Almodovar regular) and Penelope Cruz who have oh-so brief cameo roles at the opening of the film as married airport workers whose baggage mishap leads to major problems on-board the Peninsula Airways jet bound from Madrid to Mexico City.

Once up in the air it turns out there is a problem with the landing gear, and the plane is held in a holding pattern while authorities work out what to do. In Hollywood this would be the starting point for a nerve-jangling thriller…but in the world of Almodovar the economy-class passengers (and their attendants) are promptly drugged and sent to sleep, leaving three male flight attendants to look after the smattering of business class passengers.

As things get more and more tense, Joserra, Fajas and Ulloa resort to copious amounts of tequila (both for the passengers and themselves), before settling on their sure-fire way of calming the situation – a cocktail concoction called the Valencia Cocktail that happens to include liberal sprinkling of mescaline. They also – a delightful centrepiece to the film – perform a lip-synched version of the Pointer Sisters’ I’m So Excited, just to help rack-up the sexual charged atmosphere.

References to Spain’s current situation are there – the economy class being ‘drugged’ a link to how workers in Spain are treated; Mas and his corrupt behaviour and Norma with client list of well-to-do bondage lovers – while the empty La Mancha airport they finally manage to land links to the real-life Castellón Airport north of Valencia, built in boom but now empty in bust.

Oddly, it is when the film is on the ground that it lacks energy. The sub-plot involving Galan and his girlfriends (old and new) switches to land, and while entertaining you simply wait for the story to get back into the aircraft and its feast of bright colours, delightful production design and exuberant performances.