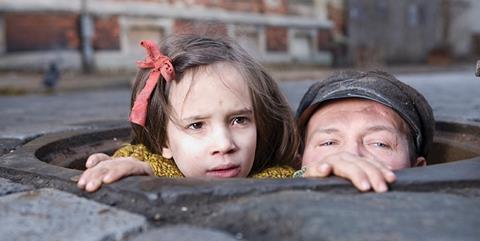 Agnieszka Holland returns to World War II for the first time since Europa, Europa in 1990 with In Darkness, which is her best film since then. A 145-minute epic set largely in the darkness and dirt of a sewer, it’s the gripping true story of a Polish sewer worker in Lvov who keeps a group of Jews hidden in the sewer under the noses of the occupying Nazi forces. Solid, well made and extremely well-shot, it is a return to form of sorts for Holland, whose English language work has never matched the strength of her European films.

Holland does a terrific job of recreating the murky sewers, in both design and lighting, skillfully sustaining the drama even as it takes place in gloom.

Sony Pictures Classics picked up US rights to the film at Berlin this year, indicating its confidence in the film as a solid arthouse performer and possible awards candidate. Betafilm presold the film in other territories and should close many more after the world premiere here as a Special Presentation in Toronto.

Wonderfully expressive Polish actor Robert Wieckiewicz plays Leopold Socha, the sewer worker, whom we first meet burgling a house with his pal Szczepek (Krsysztof Skonieczny). It’s early 1944 and the Nazis are starting their liquidation of the Lvov ghetto, randomly murdering Jews and carting thousands off to death camps.

The opportunistic Socha and Szczepek come across some of the ghetto inhabitants breaking through from the ghetto into the sewer and agree to hide them in the labyrinthine tunnels for 500 zlotys a day. Socha demands that the group be whittled down further to 12 people and places them in a secluded space off one of the tunnels.

The group includes wealthy Pawel Chiger and his wife and two children but its unofficial leader is Mundek Margulies (Furmann), a hustler with a gun who harbours deep suspicions about Socha’s motives.

As the months wear on, Socha’s motives indeed become purer and as the German war effort begins its decline he becomes passionate about protecting “my Jews” as he calls them from numerous threats of discovery that could bring catastrophe not just to them but to his own family.

Holland does a terrific job of recreating the murky sewers, in both design and lighting, skillfully sustaining the drama even as it takes place in gloom. You can sense the stink and grime of the sewers, as the Jewish escapees battle rats, hunger, in-fighting and madness during their 14-month ordeal.

Screenplay: David F Shamoon, based on the book In The Sewers Of Lvov by Robert Marshall