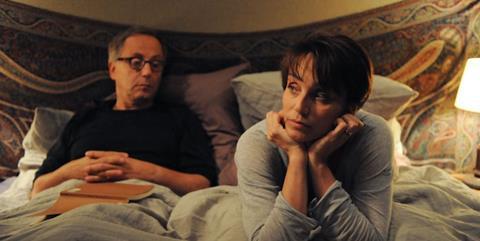 Francois Ozon’s cleverly structured psychological thriller is an intriguing delve into the mine-field of the teacher-student relationship, and while its low-key cleverness never quite takes the film to the satisfactory ending the story deserves, it is nicely performed and for a while an intriguingly subversive drama.

Luchini is perfect as the emotionless and bemused looking Germain, while Kristen Scott Thomas is at the top of her game as his frustrated wife.

Based on Juan Mayorga’s play The Boy In The Last Row, there are deliciously edgy and sexually tinged moments, as it dwell on a duplicitous teenage boy who manages to corrupt and manipulate those around him. The casting of Fabrice Luchini, Kristen Scott Thomas and Emmanuelle Seigner will help attract distributor attention along with the promise (though never quite delivered) of psychosexual goings-on.

High school literature teacher Germain (Luchini) has lost his passion for teaching and is increasingly bored and depressed by the way the school is heading. Things change when he starts reading the homework of student Claude (Umhauer), whose revelations of his antics both impress Germain in terms of writing style and also worry him about what is discussed.

Claude talks  - in text – about how he watched a middle-class house from a park bench, and eventually befriended his classmate Rapha (Bastien Ughetto), who lives there with his mother (Seigner) and father, just so he can get into this seemingly perfect household. Germain finds himself drawn into the boy’s stories, desperately waiting for the next bit of writing, and sharing them with his wife Jeanne (Scott Thomas) who runs an art gallery and is desperately worried about her business being closed down,

Germain gives Claude books to read and tries to influence his writing style, but this simply sees the boy coming up with different variations of the ‘story’ as Claude manipulates his way into the family and ‘seduces’ each in turn. Germain starts to see himself as an observer of the stories themselves and begins the cross the lines both at work and in life.

Ozon keeps the script clever and the audience guess, and while never never offers any easy answers at the end as events spiral out of control, the film is never quite as satisfying as it might be. Luchini is perfect as the emotionless and bemused looking Germain, while Kristen Scott Thomas is at the top of her game as his frustrated wife. Umhauer has the perfect blend of intelligence and youth, though quite how he managed to get just so manipulative is never explained, apart from one sequence showing him dealing with his disabled father.

Who is exploiting whom remains at the core of the film, and while the film never really provides all of the answers it is beautifully made by Ozon, who includes some delicious comedy moments (such as the sexually explicit art work – a Nazi symbol made from penises for example – in an exhibition at Jeanne’s gallery) and elegant production design to help construct a film that will impress his fans.