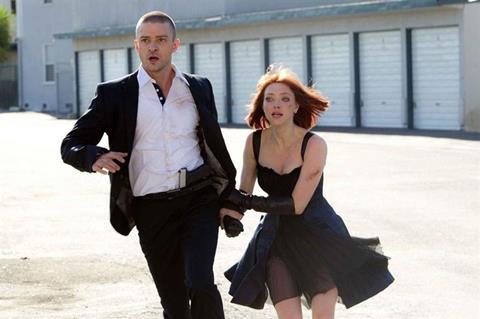 A pleasing throwback to an era in which ideas powered movies more than special effects, sci-fi action thriller In Time makes literal the scramble of underclass day-to-day existence, telling a story wherein everyone ages only to 25, and thereafter survives or perishes by trading on one year of allotted time, which is the currency of the world, and marked by a green countdown clock on their arm.

Providing a steady flow of lively entertainment due in large part to the brain-tickling nature of its central conceit, the movie only runs into a bit of trouble when attempting to service some of the more whiz-bang action elements of its fight-the-powers-that-be plot.

Providing a test of Justin Timberlake’s star power, In Time should benefit from gangbusters word-of-mouth amongst its youth-trending target demo, and also do very good business internationally, given the translatable nature of its premise.

Like almost all of his peers, where even four minutes for a cup of coffee and a two-hour debit for a bus ride are subject to unannounced price hikes, factory worker Will Salas (Timberlake) lives a hand-to-mouth existence. He receives a meager punch-clock allotment of time at his job each day, and shares with his mom (Olivia Wilde) and others, which consistently keeps him under the 24-hour mark. When he’s unwittingly bequeathed a huge amount of time by a mysterious man after saving him (people can transfer time by grasping forearms, and twisting), Will runs afoul of a group of “timekeepers,” led by Raymond Leon (Cillian Murphy), who police the theft or illegal transportation of units across time zones, which in this case refer to quite literal class system barriers.

Gaining transport to the elite burgh where the virtually immortal live in luxury and are surrounded by bodyguards, Will meets Sylvia Weis (Amanda Seyfried), the daughter of a finance magnate, Philippe (Vincent Kartheiser). When Leon tracks him down, Will breaks free, and takes Sylvia hostage. Once her eyes are opened to the terrible cost of time-hording, Sylvia comes around to Will’s point-of-view, and together they try to take on the corrupt system.

Exploring many of the same themes he previously touched upon in Gattaca and Simone, Niccol wisely doesn’t waste a lot of time or energy explaining how his near-futuristic world got this way. Still, while the story is ripe with political metaphor (Will and Sylvia become redistributors of her father’s vast cache of resources), Niccol takes a pass on the opportunity to make something truly transgressive or subversive, instead willing to trade on more familiar and personalized narrative pivots. Ergo, it remains to be seen if the movie has what it takes to tap into the same sentiments fueling the Occupy Wall Street protests, and become a zeitgeist hit.

It’s basically a surface treatment of the concept, and at least one part frustrating for every two parts fleet and fun. The story’s third act becomes a tangled mess of competing ideologies, as Niccol struggles to find a tonal balance between Will and Sylvia’s Bonnie and Clyde instincts; Leon’s rejection of Philippe’s bribe but continued dogged pursuit of Will and Sylvia; and a third story strand involving a bunch of thuggish “minute men” robbers (fronted by Alex Pettyfer) that terrorise the ghetto, and want to get Will. More material with Leon, or some proactivity on the part of Philippe could have been time better spent.

A superb below-the-line team gives In Time a certain stylishness and nice production value, even though budgetary constraints obviously influence some set-ups. Cinematographer Roger Deakins captures the stark vistas of downtown and eastern Los Angeles, while production designer Alex McDowell ably abets script choices that favor desolation over desperation, and somewhat counter-intuitively but intriguingly avoid the frenzied, dirty lawlessness of so many futuristic and/or apocalyptic tales.

Timberlake is perfectly serviceable in conveying world-weariness, but an actor with a bit more grittiness or nuance could have given Will an edgy charge. In fact, few actors here make a particularly strong impression; there is a very straightforward, flat tone to a lot of line readings, and an almost nondescript, emotionally drained quality to many performances, further suggesting that the bulk of Niccol’s talents lie behind the keyboard.