A film about opportunity seems fitting for director Joe Menendez and writer Jon Molerio, who have finally collaborated on their first project 16 years after a fateful encounter. 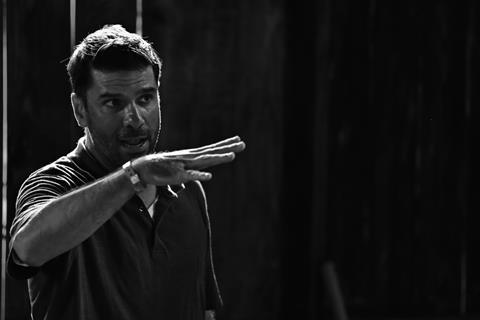 The sequel to Menendez’ well received 2007 release Ladron Que Roba A Ladron, Ladrones is a US action-comedy with American-style jokes set in south Texas, even though the dialogue is mostly Spanish and the film features Latin American superstars Fernando Colunga and Eduardo Yañez.

Opening on October 9, the action-comedy will screen on close to 400 screens nationwide via Pantelion Films, which produced alonsgide Lantica Media.

What was it about the success of Ladron Que Roba A Ladron that will make audiences want to see the second film?
The idea being that these characters are Robin Hoods. What we learned after the first one — it wasn’t our intention – but we came up with this idea about a heist being pulled off by the people you don’t notice. Afterwards, audiences would comment that they loved the Robin Hood aspect of this: they seize not for themselves but for other people. That spoke to us, so we decided, well why don’t we just go for it 100 percent? Make it Robin Hood meets Seven Samurai. In Seven Samurai there were villagers in town who asked a samurai to defeat the bad guy. It was the model for this one. It was the really the audience who gave us the idea to do this, which gave us the Robin Hood aspect for it.

How did you two come together to make this film?
I’ve known Jon for about 16 years. In fact, Jon was a waiter at a restaurant when I was literally on my second date with my now wife. He starts to make me laugh and he was one of the funniest guys that I ever met. We both learned that we were both from Miami. My wife to this day says I’m very lucky to have a third date. I spent most of the second date talking to Molerio. Since then we have been very good friends. Obviously my wife married me and is still with me, thank God, so it all worked out.

Is this the first time you and Jon formally worked together?
This is the first thing we made together. We have written a lot of things together. I’ve actually stolen a couple of things that he gave me and I gave him. After the premiere, we hugged each other. It was great. It was exciting.

What was the inspiration behind the storyline for this film? How was the script developed?
We were searching around for a while. We knew there was this humanistic part of it where good guys are helping the little guy defeat a bad guy. We knew that that is what is was going to be. But what was the McGuffin?

I spent a lot of time in Texas doing a show for Robert Rodriguez and so I got very familiar with Texas and a lot of Texas stories. People are still having land disputes that are 162 years old dating back to the Mexican-American War; people trying to claim land. Prior to that war, the Mexican border went all the way up to Oregon, really high up there. When the current borders were drawn after the war, the Treaty Of Guadalupe Hidalgo said that there were all these Mexican ranchers that expanded all the way to Oregon.

So what do you do with all those people? What do you do with the people that were once in Mexico and overnight, became [part of] the United States? Well the Treaty Of Guadalupe said that those Mexican Ranchers who had their original status land grants that the Mexicans won from the Spanish would be allowed to stay on their land. And while they had those papers, the land grants became currency. It became gold. Whoever had those grants kept their land. So what happened was bandits and shady lawyers started scheming and killing these Mexican ranchers for these papers.

A lot of people lost their land and a lot of people kept their land. Our story is about a family that kept their papers, but then the current-day bad guy ends up stealing them. They’re about to lose their land. That’s why our heroes get hired. So the film is about keeping your home and keeping the land. Keeping your ancestral home. It sort of ties in with what Latinos are very much – well, every one is experiencing – the idea that when you lose your home, you lose everything. What better reason to fight than your land, your home?

Me being raised in South Texas, it’s refreshing to see a film covering a bit of Tejano history and the Treaty Of Guadalupe Hidalgo, which I think a lot of Americans overlook and isn’t unless you’re from Texas. Do either of you have roots in Texas? You were telling me you had a project there.
Not only was I doing [El Rey TV series] From Dusk Till Dawn, but my wife was born in San Antonio. She’s got family that still lives in San Antonio, but she’s got tons of family that lives in South Texas in Mercedes and Laredo. I’ve been to South Texas. I’ve been to that part for a little, not only for my wife’s family. I’m not from there, but I feel a kinship there because I’ve been there so many times doing shows for Robert.

Which city is Kilroy adapted from?
Kilroy is obviously a fictional town, but we wanted [it to be] even smaller than Mercedes. I remember Mercedes being small, but even that was too big. The idea is that Kilroy owned the town. They owned the sheriff, they owned the post office, newspaper, everything. It had to be a town, more of a municipality. It wasn’t based on any one town, but we definitely looked at Brownsville and McAllen to get a sense to get a sense of how that area looked like. That’s how we fashioned what Kilroy was. Frankly, we wanted a bit of license to create our own town, too. I didn’t believe that there wasn’t a Kilroy, Texas. It sounds like that it exists.

How long did it take to shoot?
It took 30 days to shoot the movie. As a director, I’ll tell you its definitely not enough time. Thirty days was a good amount of time to have enough time to do action set pieces. Mostly, the set pieces were all scheduled the way they’re usually scheduled, but the thing that was really important for us as filmmakers was to make sure we got the American style humour. The whole notion of the movie is that it’s an American movie. A lot of people pause and cock their heads when you say it is an American movie. ‘Well isn’t it in Spanish?’ – they’ll say. Well yeah, it’s an American movie in Spanish. To take that even further, everything in the movie is structured like an American movie. The jokes are primarily styled like American jokes. It’s really because we don’t know how to make a Mexican movie, a Dominican or a South American. All we know as [people of] Latino descent being raised in this country is how to do things American-style.

Did you shoot in other locations besides the Dominican Republic?
One brief little thing was shot in Los Angeles. Everything else was shot out there. There was lot of conversation if we could make it look like south Texas. The climate in south Texas is almost identical with [Dominican Republic]. The question was finding terrain, geography, and topography that looked like south Texas. And that was actually surprisingly easy to do. It was not that hard. There were sometimes when we had to digitally remove palm trees for more of a Texas scene. But the beach scene on the resort, that didn’t matter because South Padre is beautiful just like those [Dominican] beaches.

There are some underlying themes that are pretty significant especially for the Latino community. One thing I noticed was that the main females played intelligent, strong roles in the film. Like protagonists, Jackie and her mom and the antagonist Miranda. Was this intentional?
It was absolutely intentional. Jon and I both married very strong women. I married to a Latina, and Jon married a gringa. But believe me, our wives do not take our shit. My daughter who is nine is absolutely a strong woman. My mother and my sister were both strong women. To me, we want to make everyone formidable.

What are some other themes in this film?
The biggest theme in the movie was opportunity. We had a long conversation about that. Why don’t’ we succeed? Why do some people fail and those who don’t? Where we ended up was opportunity. For instance, you give any Latino opportunity, by and large, they’re going to succeed. They’re going to prove their worth. I have said that in my career. I said, ‘If you give me opportunity I’m going to show that up.’ That is very personal to me.

We wanted to show that people in this town basically had opportunity written away from them. Now that they have this opportunity to do something good for themselves, they do it and they thrive. For me, opportunity is the running theme throughout the movie. Give people the opportunity to grow and they will thrive.

How did financing go about for this film?
It was a co-venture between Pantelion, who is releasing the movie, and Lantica Media, with Lantica doing most of the heavy lifting in terms of financing. So we were able to get some cool incentives to shoot down in the Dominican Republic. But Pantelion Films also partially financed… I worked on Pantelion side.

After the premiere, how will the film be released? On Demand? DVD?
This movie is going to be on almost 400 screens nationwide, 50 down in south Texas for sure. It’s going to be in Miami where I grew up, it’s going to be everywhere. For the first weekend, it’s going to be predominantly in Latino neighborhoods. Obviously, if the core comes out like we want them to and hope they will then it will expand and go in other areas. Hopefully it will have that sort of crossover appeal. Like I said earlier, we made an American movie in Spanish. We feel like it should have appeal not just the core audience of Spanish speakers or Latinos but we do have a movie that can be seen by anybody and enjoy it.

You say this movie is a Latino film. Can you call it a Hispanic film? What’s the difference the terms?
Oh man, I talked about this with someone the other day. I think Hispanic is someone with any kind of Latin American descent. Somebody from Spain could be Hispanic. Latino is more of a US thing. A Latino is someone who speaks Spanish from the US. But again, this movie could be either one. This movie can play in Madrid, Brazil, anywhere in the US. I think it’s both. It’s a little bit of everything. It sort of pan-Latin. It’s got Mexican, Cuban, Dominican, it’s got Americanos, it’s got everything. The movie is 30% in English, so it’s got a little bit for everybody.

What is your next project?
Jon and I are writing something. We’re working on something that is straight up an adventure movie…. Same type of humour, same type of escape set-up, you know, action-comedy. Definitely something that is a natural segue from Ladrones that is right on our wheelhouse. If you like this, little niche, action-comedy American movie whether it’s in English or in Spanish, that’s sort of our niche.

Anything else you’d like to add?
If you want to go to the movies to escape… to me, that’s all that this movie is. It’s a fun, popcorn, escapist movie.