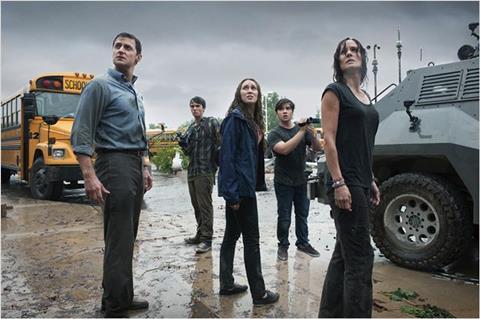 The success of Jan de Bont’s 1996 hit Twister set the bar pretty high when it come to weather-orientated disaster movies, and while the next generation CGI storms (twisters in flames, deadly cyclones and a fleet of jumbo jet swept away by the winds) in Into The Storm are mesmerisingly impressive, it is when the weather subsides and the dialogue is brought into play that the film flounders like a fish out of water.

While the action is watchable when the twisters are in full flow in the end this weather adventure turns out to be something of a false alarm.

This Warner action-thriller has been trailered extensively and should generate a solid initial audience based on the grandstanding effects alone, but with its low-key cast and likely less-than-positive reviews it looks unlikely to fare well against some of the genuine summer blockbusters out there.

Where Twister was as much about the bickering relationship between the two lead characters (played with conviction by Helen Hunt and Bill Paxton) and the humourous antics of the storm chasers (which included a young-ish Philip Seymour Hoffman) as it was the weather, Into The Storm is a fully fledged disaster movie, with director Steven Quayle (who made Final Destination 5) a dab hand at marshalling the thrilling effects.

The film is set against a single day around the town of Silverton, a middle America location that happens to be hit by an unprecedented series of tornadoes. It is a day like any other day – at the local high school it is graduation, with the usual celebrations hampered by a burst of heavy rain just as the speeches finish. But just as the youngsters head for the relative safety of the school the weather starts to get nastier.

When school vice principal Gary Fuller (The Hobbit star Richard Armitage) realises one of his teen sons Donnie (Max Deacon) is trapped in an abandoned factory with Kaitlyn (Alycia Debnam-Carey) the girl he is keen on, he heads out into the wilds - accompanied by his other son Trey (Nathan Kress) , who was supposed to be video-recording the graduation and therefore handily carries a camera everywhere – to try and find them.

As they head through town their car is damaged in the storm, but they are helped by a team of well-equipped storm chasers, led documentary filmmaker Pete Moore (Matt Walsh) and  meteorologist Allison Stone (Sarah Wayne Callies, from The Walking Dead) who agree to aid them…as long as Trey keeps on filming.

Also out to track the storm – though for rather different reasons – are Silverton’s very own adrenaline junkies, Donk (Kyle Davis), an amateur daredevil with a heady 302 YouTube followers and his buddy Reevis (Jon Reep). This oddball pair at least offer some humour in amongst the rather serious nature of the film as Fuller is determined to save his son and Moore is equally determined to get the footage he has been chasing all of his life.

The furious and ferocious twisters that hit Silverton are impressively put onto the screen with the script’s oh-so-familiar reliance on the ‘found footage’ genre at least pitching the camera right into the swirling tornados. What the film lacks – apart from convincing dialogue – is a sense of humour…or even a real sense of wonder at how terrible nature can be. Instead it seems like the devastating twisters are simply plot devices rather than convincing things that could actually happen.

Main leads Richard Armitage, Matt Walsh and Sarah Wayne Callies take it all suitably seriously, but their characters are thinly drawn and never really develop. The youngsters in peril are all largely forgettable, and while the action is watchable when the twisters are in full flow in the end this weather adventure turns out to be something of a false alarm. And without being too crass, it reminds you how great the effects and story in Twister were.