It’s Kind Of A Funny Story 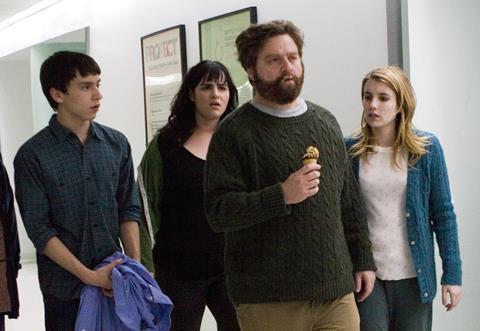 In their first two films, Half Nelson and Sugar, the writer-directing team of Ryan Fleck and Anna Boden managed the notable feat of tackling potentially trite subject matter in original, deeply affecting ways. It’s Kind Of A Funny Story, their first adaptation and first attempt at comedic material, traces the exploits of a depressed 16-year-old who admits himself into a psychiatric hospital, and the filmmakers adroitly sidestep the clichés of the insane-asylum genre. However, the determinedly low-key style requires a patience that isn’t always rewarded.

It’s Kind Of A Funny Story demonstrates an impressive commitment to its understated, lifelike tone.

Focus will open the film on October 8, looking for Oscar votes and art-house interest. But commercial prospects could prove limited considering that Fleck and Boden’s previous films have grossed worldwide less than $6m combined, not to mention that their new effort’s biggest marquee name is Emma Roberts. Mixed reviews seem likely, further suggesting that many will choose to discover this Funny Story on the small screen.

Depressed and vaguely suicidal, Craig (Keir Gilchrist) decides to check himself into a psychiatric hospital, figuring a quick visit will score him some strong drugs that will improve his mood. But once admitted, he discovers by law that he must spend five days at the facility in order to be granted his leave. The prospect at first seems horrifying, but he slowly befriends Bobby (Zach Galifianakis), an adult patient, and Noelle (Roberts), a pretty 16-year-old who seems to be interested in him romantically.

Based on Ned Vizzini’s semiautobiographical 2006 novel, It’s Kind Of A Funny Story adopts the nonchalant tone of its title, opting for an emotional middle ground between snarky satire and melodramatic crescendos. (Indeed, even the film’s funnier moments are treated more as gentle ironies than laugh-out-loud set pieces.) Pitching the proceedings in a minor key, Fleck and Boden quietly observe these mental patients without much desire to romanticize or even dramatize their maladies. Unlike such movies as One Flew Over The Cuckoo’s Nest and Girl, Interrupted, It’s Kind Of A Funny Story isn’t after social commentary or narrative fireworks: The filmmakers simply want to present the day-to-day lives of people whose grip on reality is questionable.

In Half Nelson and Sugar, Fleck and Boden dissected the clichés of, respectively, the inspirational-teacher genre and the inspirational-sports film, delivering sobering, clear-eyed portraits of characters who had fallen through the cracks of society. Movies about mental wards have their own inspirational clichés – not to mention films dealing with precocious, unhappy teens – so it’s understandable why Fleck and Boden might be intrigued by Vizzini’s book. Unfortunately, the intentionally small-stakes drama that plays out can’t help but feel inconsequential. The filmmakers don’t want to go for the expected payoffs audiences would associate with such a movie, but they haven’t quite figured out a better way to tell a story weighed down by such familiarity.

As the nervous, muted Craig, newcomer Gilchrist has a tricky assignment, one he can’t completely crack. A depressed young man who feels pressure from his father to succeed in the world, Craig understands that he doesn’t have it as bad as his fellow patients, and yet he can’t keep from projectile vomiting during moments of stress. The filmmakers and Gilchrist do a nice job of grounding the character in the mundane realities of adolescent angst without trying to exaggerate the direness of his situation. But because the character is so withdrawn, Craig’s predicament doesn’t resonate very deeply. Cheap emotional tricks would have felt manipulative, but in their place Gilchrist gives us a young man so subdued he practically disappears.

His co-stars succeed with better-drawn roles. Roberts convincingly plays a pained young woman who pulls Craig out of his shell, while comedian Galifianakis shows some strong dramatic chops as a unlikely father figure for Craig, even though the young man isn’t quite sure what landed Bobby in the hospital in the first place.

In the end, It’s Kind Of A Funny Story demonstrates an impressive commitment to its understated, lifelike tone, although it does occasionally wander into Wes Anderson territory, delivering flashbacks to Craig’s pre-hospital existence that can come across as achingly quirky. Fleck and Boden’s first two films argued that no storyline is clichéd if its tellers approach it with the right passion and perspective. It’s Kind Of A Funny Story isn’t nearly as strong, which in its own way shows just how remarkable it is when done right.

Screenplay: Ryan Fleck & Anna Boden, based on the novel by Ned Vizzini