Documentary film-maker Ada Ushpiz tells Screen about charting the life and fertile mind of a great thinker in her new film Vita Activa, The Spirit Of Hannah Arendt. 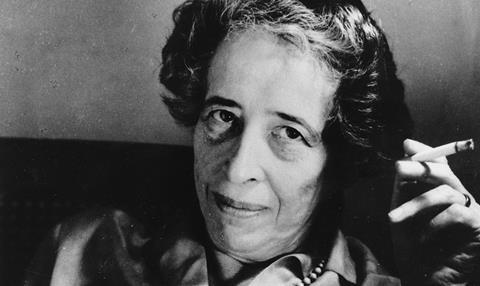 When Ada Ushpiz’s timely documentary Vita Activa, The Spirit Of Hannah Arendt, exploring the roots and legacy of the legendary philosopher’s thinking, premiered at Munich International Film Festival earlier this year it played to a packed-out theatre. “There was not a ticket to be had,” says respected film-maker Ushpiz, whose credits include Good Garbage, Desert Brides and Detained. Today’s screening at Jerusalem Film Festival, where the film is playing in the documentary competition, is also sold out.

“They’re not just coming for the documentary,” declares Ushpiz. “They’re also drawn by the figure of Hannah Arendt. She remains as popular, if not more popular, than when she was alive because she was ahead of her time.”

“She is beyond post-modernism. She was a thinking person. She didn’t subscribe to any set doctrine or school of thought but based her writings on experience and what was really happening. She had the ability to universalise her personal experience.”

Arendt’s writings, notes the film-maker, have influenced movements as diverse as Poland’s Solidarity and the pro-democracy Arab Spring. To this day, they also remain a source of inspiration for the Jewish secular movement. The philosopher’s life-long defence of the need for a plurality of thought and voices makes Arendt’s work particularly timely, Ushpiz adds.

In Vita Activa, The Spirit Of Hannah Arendt, she hones in on Arendt’s early writings, focusing in particular on her most famous work, Eichmann In Jerusalem, based on the trial of Adolf Eichmann in 1961, for his role as an administrator supporting the deportation and extermination of Jews during the Holocaust.

It was in this work that Arendt crystallised her theory about the “banality of evil”, stemming from Eichmann’s assertion that he wasn’t guilty because he had simply been carrying out orders. “I came to the whole thing because I was intrigued by the idea of the banality of evil,” says Ushpiz. “The more I live in this world, the more I believe it is relevant.”

The documentary traces how Arendt’s thinking and writing grew out of her experiences growing up in Germany, leaving the country during the rise of the Nazi party and subsequently living a peripatetic life across Europe.

She touched down in Prague, Geneva and Paris, and was briefly interned by the Nazis in France before fleeing to the US in 1941. This period in Arendt’s life resulted in her writings on what it meant to be a refugee.

Her theory that stateless people find themselves “superfluous” to society remains as relevant now as it did at the time of its formulation in the late 1940s.

Ushpiz’s film also touches on Arendt’s complex relationship with her philosophy professor Martin Heidegger, who was later discovered to be a Nazi sympathiser.

“Her relationship with Heidegger was complicated,” says the director. “Researchers have recently come across lectures he gave in 1933 and 1934 while he was the rector of the University of Freiburg. He speaks in real Nazi language, it’s really terrible.”

Vita Activa intercuts archival audio and video footage of Adolf Hitler and his military chief Hermann Göring, 1930s Europe, refugee conveys, the horrors uncovered in post-war Europe and the Eichmann trial with contemporary interviews with academics who either knew Arendt or have studied her writings in depth.

Arendt’s words on the subject of being a refugee, for example, run over footage of people being loaded into lorries, a soup kitchen for Jewish refugees in Paris in the 1930s and images of Hitler addressing his followers.

Telling her own story

Having spent five years researching, financing and producing the documentary, Ushpiz says she would like to make a second feature that would examine Arendt’s work in the final decade of her life, and its impact in the subsequent decades. “For me,” concludes Ushpiz, “the work of her final years was in many ways even more interesting.”