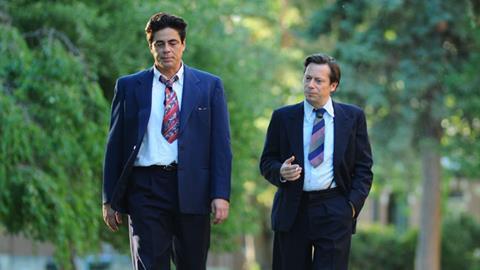 An impressively nuanced and intriguingly un-showy drama, Arnaud Desplechin’s Jimmy P. Psychotherapy Of A Plains Indian is a film of subtle understatement, resisting the temptation to engage in overly dramatic flourishes and providing a solid platform for the charismatic talents of Benicio Del Toro and Mathieu Amalric, who deliver memorably mannered performances.

The issues in their characters’ background are touched on but never exploited, with Desplechin letting the gently developing relationship drive the story rather than any obvious dramatic devices.

Between them, Del Toro and Amalric could have reduced the film to a series of showy acting moments, but Desplechin seems to have been able to harness their considerable talents (for much of its time the film is a virtual two-hander, and could work just as well as a theatre production) to bring out the strength of this relatively simple story of a World War II veteran getting psychiatric help after the end of the war.

Inspired by a true story, and adapted from Georges Devereux’s 1951 book Reality And Dream, the film opens in 1948, with Native American Blackfoot Jimmy Piccard suffering from numerous symptoms, including temporary blindness, hearing loss and dizzy spells. He is admitted to the Topeka Military Hospital in Kansas, an institution specialising in mental illness for war veterans.

The doctors there appreciate his serious psychological problems, but dismiss schizophrenia, and decide to call in anthropologist, psychoanalyst and specialist in Native American culture Georges Devereaux, a Hungarian who relocated to French, changed his name and specialised in the study of the Mojave Native Americans.

The pair start to spend an hour together each day, with Devereux gently probing into Jimmy’s past and allowing him to gradually talk about his attitude towards women (and his mother and sister in particular), incidents of his past and what happened to him during the war. Jimmy still veers between mental blackouts and moments of lucidity, while at the same time the relationship provides Devereux with a solid project and a much-needed sense of place.

Each is escaping aspects of their past, and the relationship turns out to be therapeutic for both men. Jimmy comes to terms with the issues that lie at the core of his problems, while Devereux relaxes into the environment, and finds a brief bit of happiness when his is visited by his married lover Madeleine (a delightful performance by Gina McKee).

Arnaud Desplechin, whose film A Christmas Tale screened in Cannes in 2008, makes great use of the locations, costumes and design, and shoots simply and elegantly, often ending scenes quickly and unsensationally and moving quickly onto the scene through fast edits. Benicio De Toro makes for a gentle yet physically striking Jimmy, his sad eyes and browbeaten expression perfect for a man bearing great internal pain, while Mathieu Amalric is a bundle of energy, ticks and mannerisms.

The issues in their characters’ background are touched on but never exploited (racism around Jimmy’s Native American ancestry or Devereux’s Hungarian Jewish background), with Desplechin letting the gently developing relationship drive the story rather than any obvious dramatic devices.