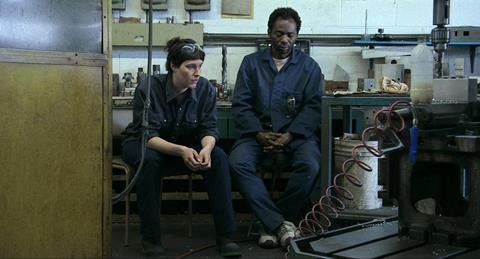 Prolific Quebecqois film-maker Denis Côté explores the world of work in Joy Of Man’s Desiring (Que ta joie demeure), a poetic and hybrid study of industrial life, factories and the meaning of labour. After the fiction of his Berlinale entry last year Vic + Flo Saw a Bear, Côté returns to the poetic documentary-essay mode of his Carcasses and Bestiaire in a film that uses factories and workshops as the setting for a formalised, sometimes theatrical - and entirely mesmerising study. The abstraction and austerity mean that commercial prospects lie only in the artiest niche sectors, but festivals are a natural home for this distinctive and involving, albeit minor-key piece.

Despite the Brechtian ‘lessons’ seemingly offered by the film - which contains as many images of entrapment and enclosure as Côté’s disturbing zoo documentary Bestiaires - the film doesn’t lead us towards any strict conclusion.

The film begins enigmatically with a close-up of a woman talking over her shoulder, making a seemingly amorous pact with someone who may be a lover, and whom she warns she might one day destroy. It soon becomes apparent that she’s effectively an embodiment of the Workplace itself, and that the potential lover is every worker. The film kicks in with a series of shots of different pieces of industrial machinery, hammering away, crunching, punching holes and, as it were, bumping and grinding - the sexual undertones very evident in all this machine activity, parodying the movements of the human body.

What follows is for much of the time wordless montage of different workspaces and the people who inhabit them - heavy industry at first, then a variety of locales where people do either highly mechanised and automatic work, tuning their bodies to machine rhythms (as in a hospital laundry) or more personal, precise work, like assembling furniture or organ keyboards.

These montages are punctuated with spoken vignettes in which workers, many of them immigrants to Quebec, exchange thoughts about their workplaces and their origins. Sometimes we seem to be watching chat between real workers - as when a Moroccan man gets into a scabrous conversation about his country’s royalty.

But for the most part, we seem to be watching actors performing highly composed, impersonal dialogue about the nature of work and its satisfactions, or lack of it: sometimes identifying themselves openly by stereotypical titles, such as ‘depressed worker’, ‘unemployed woman’. These scenes are sometimes fragmentary, sometimes more expansive, as in an African worker’s droll parable about the pleasures of work and the dangers of exploitation.

Despite the Brechtian ‘lessons’ seemingly offered by the film - which contains as many images of entrapment and enclosure as Côté’s disturbing zoo documentary Bestiaires - the film doesn’t lead us towards any strict conclusion. Rather, it offers a stimulating poetic montage of ideas about labour, leisure and - as suggested by the Bach composition heard sporadically - humanity’s higher satisfactions and aspirations. The music is part of a terrific sound design - by Frédéric Cloutier and Clovis Gouaillier - that turns mechanical noise into a rhythmic ‘score’ as mesmerising as anything by Kraftwerk and their ilk.