Other winners include documentary Mallory from Helena Třeštíková. 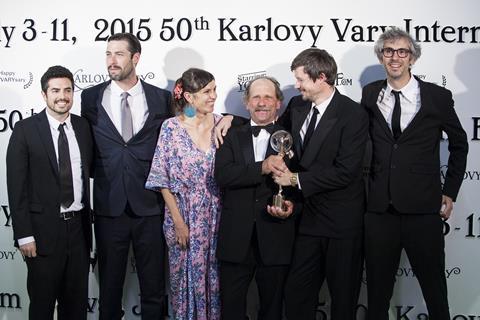 US drama Bob and the Trees has won the Crystal Globe at the 50th Karlovy Vary International Film Festival (KVIFF) (July 3-11).

Bob Tarasuk, a logger and rap fan who plays himself in the film, accepted the prize at the festival’s awards ceremony alongside director Diego Ongaro.

After accepting the festival’s top prize, the director revealed he had ploughed his own money into the film and said: “This really is a surprise. We had virtually no money to shoot the film so I had to invest my and my wife’s money, and I would like to thank everybody involved in making the film.”

He added that the film has yet to find a distributor.

Tarasuk added: “I have never won anything. I have never left the States. But my grandmother was Czech and my grandfather Ukrainian so I dedicate this award to them.”

The film, which debuted at the Sundance Film Festival in January, also won the Ecumenical Jury Award at Karlovy Vary.

Set during winter in in rural Massachusetts, the film centres on Bob, a fiftysomething logger with a soft spot for golf and gangsta rap who struggles to make ends meet. When a beloved cow gets wounded and a job goes awry, Bob begins to heed the instincts of his ever darkening self.

The Special Jury Prize was given to Austrian director Peter Brunner for the film Those Who Fall Have Wings, a drama about coming to terms with the death of a loved one.

Kosovan Visar Morina received the Best Director Award for his film Babai, the story of a small boy setting off on a journey to find his father. Babai also won the Europa Cinemas Label Award.

The jury also awarded two special mentions to animated biography The Magic Mountain, directed by Anca Damian, and the drama Antonia, a tragic story of the Italian poet.

The prize for the best film of the East of the West Competition was awarded to social drama The Wednesday Child by the Hungarian director Lili Horváth, about a young girl who strives to secure a better future for her child.

A special mention was awarded to Romanian film The World Is Mine.

The Grand Prix for Best Documentary Film went to Helena Třeštíková for her latest long-term documentary Mallory, which follows a reformed drug addit.

The jury also awarded a special mention to Austrian film The Father Tapes.

The prize for the best documentary film up to 30 minutes in length was awarded to White Death, a story of a Chilean military company trapped in the snow told using a variety of formats and animation techniques.

A special mention was granted to Women in Sink, set in an Israeli beauty salon.

The Forum of Independents Award went to US transgender comedy Tangerine, shot by director Sean Baker on an iPhone.

Actress Iva Janžurová was awarded with The Festival President’s Award, an Honorary Mention for her fundamental contribution to the Czech cinematography, at the closing ceremony.

“I promise that this award will not mean the end of my acting career,” said the actress, who thanked her colleagues, the audience and fans.

KV by the numbers

Some 35 films received their world premiere, while 26 had their international premiere and 12 their European premiere.

On the industry side, 906 film buyers, sellers, distributors, film festival programmers, representatives of film institutions, and other industry professionals were accredited.

Some 497 accredited film professionals came to the festival from abroad while 234 film buyers and distributors and 149 festival programmers chose from the new films and Works in Progress.