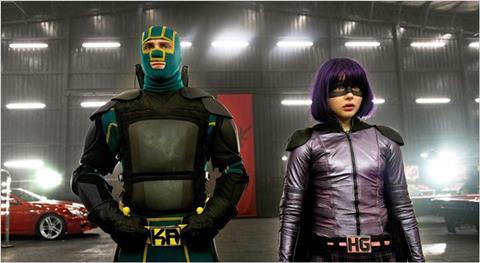 With its gleefully irreverent take on superheroes, violence, language and girl-power, 2010’s Kick-Ass turned out to be a real cult movie guilty pleasure as well as a box office hit. This equally playful sequel ticks lots of right boxes (violence, foul-mouthed language, dark humour) but ultimately feels rather scattershot and disjointed, perhaps quite simply because it lacks the sheer left-field originality of Kick-Ass…while the filmmakers are trying to develop their characters, in truth it is at its best when it is simply replaying (or maybe remaking) the over-the-top action moments of its predecessor.

In truth, what fans of Kick-Ass probably yearned for was a ‘Hit Girl’ movie.

The original theatrical film took more than $100 million internationally and profile was further boosted by a very healthy home entertainment take, and certainly there is an expectant audience out there keen for the sequel. But it enters a tough marketplace (though one lacking superhero films) with Elysium, Pacific Rim and The Wolverine slugging it out for a share of action market.

While the original was built around the origins of self-made, but rather bumbling, do-it-yourself superhero Kick-Ass (nicely played again by Aaron Taylor-Johnson), it turned out that the real star of the film was super-violent 11 year-old, sword-wielding, pocket dynamo Hit Girl (again played by Chloe Grace Moretz), who stole the show with her fruity language and sheer zest for the fight.

Sadly Kick-Ass himself is a rather dull and uninteresting (or perhaps simply so familiar in comic books tales…the nerdy teen who dreams of being someone else), and in Kick-Ass 2 it is even more clear that the real star is Hit Girl. And when she goes missing for a chunk of the film sadly Kiss-Ass 2 flounders as it struggles to find a way to keep interest and excitement intact.

The film follows pretty much straight on from Kick-Ass. Dave (aka Kick-Ass) has graduation looming while the newly orphaned Mindy (aka Hit Girl) is trying to adjust to the normal life of a teen, while being looked after by her father’s old friend Marcus (Morris Chestnut), who is well aware of her extracurricular activities, but wants her to concentrate on being a teenager rather than a crime-fighter.

Dave wants Kick-Ass and Hit Girl to be a new dynamic duo, but she decides against it, feeling the lure of lipstick, fashion and cheerleading. So Dave joins forces with a team of other DIY superheroes who call themselves Justice Forever, and are led by a born-again ex-mobster named Colonel Stars and Stripes (played with zeal by Jim Carrey, who has now pulled back on his support for the film and taken a stance on violence…odd given his character is so bludgeoningly brutal).

But as the Justice League’s heroic activities gather press attention, so they also fuel anger of Chris D’Amico (Christopher Mintz-Plasse) – aka villain Red Mist – whose mob boss father was killed by Kick-Ass in the original film. Renaming himself The Motherf%&*^r (and dressed in a self-made suit made up from his late mother’s bondage gear) he sets about gathering a team of evil super-villains, with the highest paid member being the brutal Russian bodybuilder-former KGB agent Katharina Dombrovski/aka Mother Russia (a striking Olga Kurkulina).

Things get bloody as the new evil league target Kick-Ass, his family and friends, and forces Hit Girl into making a decision between being a normal teenage girl or reverting back to being the terrifyingly tough Hit Girl. Guess which route she chooses?

To an extent writer/director Jeff Wadlow (basing his screenplay on the comic book by Mark Miller and John S Romita Jr) tries to leverage in just too many characters and sub-plots and ends up diluting what is so strong about the concept…real-life and largely socially inept folk putting on a mask and fighting evil.

On the plus side Clark Duke as Dave’s best pal Marty gets to play hero as the Captain America clone Battle-Guy; Lindy Booth is terrific as ballet teacher turned hero Night Bitch, who offers Dave a little superhero romance and Christopher Mintz-Plasse has a great old time in his bid to being the first really bad-ass super villain leader. But sadly Lyndsy Fonseca, as Dave’s school girlfriend Katie is jettisoned in a rather perfunctory fashion, and in amidst all of the various villains, heroes, family and friends the core relationship between Kick-Ass and Hit Girl gets lost for a large chunk of the film.

In truth, what fans of Kick-Ass probably yearned for was a ‘Hit Girl’ movie. Yet while Chloe Grace Moretz still has fun with the role, there is niggling feeling that she can’t quite recapture the innocent, yet foul-mouthed, charm she brought to the original film. Perhaps it is a case of simply growing up, but the more she tries hard to play Mindy young-but-feisty the more it doesn’t quite convince. That being said, there is still plenty of room for character development there…though perhaps the same can’t be said for Kick-Ass himself who feels rather one-note and perhaps best left as the so-so sidekick that he really is.