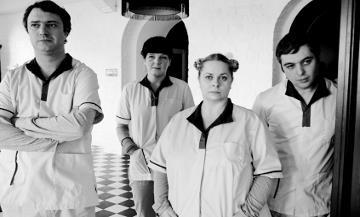 A dark, politically incorrect Belgian farce set in a euthanasia clinic, Kill Me Please has its moments, but suffers from a greedy desire to be edgy, humane and thought-provoking as well as hilarious. This didn’t stop the jury of the Rome Film Festival from awarding it the Marc’Aurelio prize for Best Film at this year’s event, and it’s true that there’s a freshness and originality to this grim black and white burlesque that keeps us watching through all its tonal swerves and dramatic cul-de-sacs. But in the end this is a frustrating film, never quite as poignant, desecratory or just plain funny as it would like to be.

Kill Me Please turns on the laconic-sardonic style and the desecratory glee in dealing with a taboo subject.

Sophisticated adult arthouse audiences may show up in smallish numbers for a film that occupies the same disturbing black comedy territory as Aaltra or Ex Drummer and features recognisable talents like Bouli Lanners and Aurelien Recoing. And distributors could conceivably get some promotional mileage out of the ongoing debate about assisted suicide.

But Kill Me Please is an acquired taste, and not enough of a hipster audience-pleaser to be a safe bet even on home ground in Benelux and France.

The clinic run by suave Dr Kruger (Recoing) in an unnamed French-speaking part of Europe is housed in a dour, secluded country chateau surrounded by acres of dank and uncommunicative conifer woods, beyond which lie towns and villages whose inhabitants, we soon learn, are hostile towards the clinic. There’s a menacing, slippery quality to Kruger that intrigues at first but by the end smacks of poor casting, as we’re clearly supposed to see him as a sincere believer in the human right to choose the manner, place and time of one’s own departure.

The inmates of the clinic are introduced gradually: among them are Virgile (Bramly, excellent), a young manic depressive who’s wanted to die since he was a kid and envisages a Rambo-style exit in a hail of bullets; monsieur Vidal (the ever-watchable Lanners), a corpulent and melancholy playboy; a film director called Demanet (actor-director Poelvoorde) who lies about his terminal cancer then slits his wrists when Kruger asks him to leave; and Juliette Evrard (Belgian TV personality Efira), an inspector with the finance police who is trying to determine whether the clinic extorts the money that so many of its grateful customers leave in their wills.

Only one death goes according to Kruger’s sanitised vision of a dignified end, and even this one is undermined by the fact that the patient in question has a lithe and naked young girl service him (it was his last wish) as he takes the fatal potion and seizes up.

“By the producers of Man Bites Dog” runs the tagline on the poster. Yes, you can read the antecedent of that savage mockumentary (co-directed by Poelvoorde) at times when Kill Me Please turns on the laconic-sardonic style and the desecratory glee in dealing with a taboo subject, not to mention its austere monochrome photography. But in MBD, we knew who was telling the story and why: the intrusive camera belonged to a TV crew who were making a documentary about a serial killer. Here, the camera never quite declares itself as a player, perching coyly between handheld subjectivity and the transparent dramatic narration of its fixed shots.

Characters seem constantly on the verge of addressing the film crew – but don’t - and the film gets around the problem by having prospective clients record little video pleas to be allowed to come and die at the clinic, which Dr Kruger watches on DVD.

Choosing a semi-documentary (but maybe not) format also means that Kill Me Please doesn’t need to stand up its story too much – so the final showdown, which sees death come in his most undignified form, rests on fragile dramatic foundations. And although it has some hilarious moments – mostly dialogue-based rather than visual – Kill Me Please lacks a coherent point. Could it be the way euthanasia clinics are made the scapegoats of our refusal to talk about death? Or the fact that even the best laid exit strategies have a habit of going wrong?

The fact that we even look for a point in what should simply be a provocatory farce is telling. This is a film that would like to be savage – but keeps getting distracted by compassion and the need to send out a serious message. And although some of those compassionate moments really are quite touching, they collapse the arm’s length audience distance that black comedies need to function.