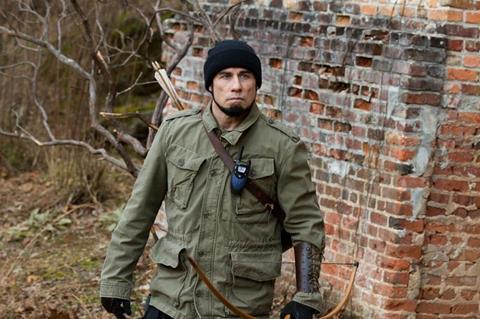 The first big-screen pairing of John Travolta and Robert De Niro, as veterans of the Bosnian conflict who fought on different sides and who clash again in a modern day cat-and-mouse fight through the Appalachian Mountains, is a hit-and-miss affair despite the undeniable star quality that the pair bring to the film.

Killing Season favours the notion that there is a certain kinship between soldiers and that eventually, despite the awful things that they have done, there is peace to be found through confession.

Killing Season, which had its world premiere at the Karlovy Vary International Film Festival, is littered with some rather nasty torture scenes (that may put off some audiences), and while it rushes through its action sequences – which get a bit repetitive and samey – and has a tame and rather unsatisfying ending, it is worth admission to see Travolta and De Niro face up to each other.

The film is a virtual two-hander, with the pair of veteran performers running through their thesping repertoire as their characters veer from drunken best buds to torture-obsessed killers, and while the film has religion at its core – much is made about confession as a form of redemption – its chief selling point if the notion of Travolta and De Niro going mano-a-mano as they stalk each other with bow-and-arrow through some stunningly shot mountainous vistas.

Travolta (sporting a rather oddly shaped beard) plays former Serbian soldier Emil Kovac who, 15 years after he escaped death in the Bosnian War, comes searching for Benjamin Ford (De Niro, sporting chinos), the American soldier who had intended to kill him during the conflict. The pair have never met face-to-face, and Kovacs tracks him to his remote cabin high in the hills where Ford is escaping human contact.

After an evening of convivial drinking and conversation (with Kovacs keen to swap war stories) the pair arrange to go hunting the next morning. But Kovacs only has Ford in his sights, and so begins a brutal series of bloody and nasty encounters, with each man vying for the upper hand and engaging in some rather brutal torture along the way.

In between their violent comings-together there is plenty of time for Kovacs to talk (a lot) about God, confession and the war, while Ford is far more taciturn – especially when it comes to what happened to him during the war – unless it is talking about family and disappointments about his ex-wife and the grown-up son he rarely sees and is awkward communicating with.

The series of encounters are essentially a cat-and-mouse affair for two old soldiers to ruminate on the nature of war, while also giving them the chance to show off their archery skills, and for Ford to show that he is still something of a mountain man at heart. Killing Season favours the notion that there is a certain kinship between soldiers and that eventually, despite the awful things that they have done, there is peace to be found through confession.

A rather soft ending doesn’t tally with the often brutal violence that has gone before, and while some of the action scenes are staged with real verve, the use of body doubles is often transparent, and when the action slows, director Mark Steven Johnson (Ghost Rider, When In Rome) throws in a few picture postcard shots of the mountains, perhaps to simply remind us that nature, not man, is the greatest, and most unrelenting, killer there is.