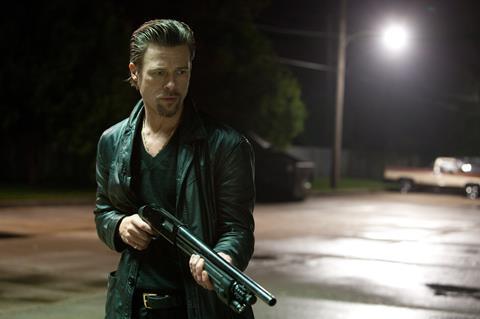 A deliciously stylish hard-boiled crime drama, Andrew Dominik’s violent and bleakly funny film is a grimly nihilistic film that revels in its harsh and brutal urban landscape. Writer/director Andrew Dominik makes great use of the widescreen format and fills his film with visual quirks to sit alongside the smartly written dialogue, and working again with Brad Pitt (the pair made 2007’s The Assassination Of Jesse James By The Coward Robert Ford) has come up with a remarkably pertinent crime film that reflects the tough times facing America.

Based on George V Higgins’ 2002 Boston-set crime novel Cogan’s Trade, Andrew Dominik has used the core story of an enforcer who is called in by the mob to take care of business, but set it against the backdrop of a country in the midst of its election in 2008. In the background the scenes of gunplay and tough conversations between men to whom violence is second nature there are extracts of politicians debating the future of the USA…but as Brad Pitt’s leather-jacketed enforcer Jackie Cogan points out when demanding his payment: “America isn’t a country – it’s a business”.

But while Dominik uses the ambient sound – via radio and television – of political preaching to help define the backdrop, he is really at his best when filming the glistening wet streets of a partially derelict city. Using a series of stylish cinematic flourishes the resulting film is a dark parable as well as being a seriously impressive old-fashioned crime film.

Two petty thieves Frankie and Russell – played respectively with real relish by Scoot McNairy and Ben Mendelsohn – are recruited to knock off a poker game run by Markie Trattman (Liotta). A mob linkman (a wonderfully pragmatic performance by Richard Jenkins, who bemoans his bosses slow-decision making abilities while also trying to knockdown hitmen prices) brings in enforcer Jackie Cogan who is asked to sort out two thieves, the man who hired them and Markie Trattman.

Cogan negotiates to bring in Micky (an excellent Gandolfini), another hitman, but is bemused and disappointed that he has lost his edge and is more interested in quaffing martinis and arranging for hookers is hotel room to fulfil the deal. Eventually Jackie has to take responsibility – he favours killing from a distance as he dislikes the emotional impact of close-up murder – and sets about sealing the deal.

There are a tremendous series of set-piece cinematic moments – ranging from a super slo-mo close-up of Jackie’s automatic in the rain as he shoots Markie to Russell drifting in-and-out of a drug-induced haze as he tries to explain where he has been – as Domink crafts a memorable crime film, with Brad Pitt reinforcing his acting reputation as a commanding screen presence.