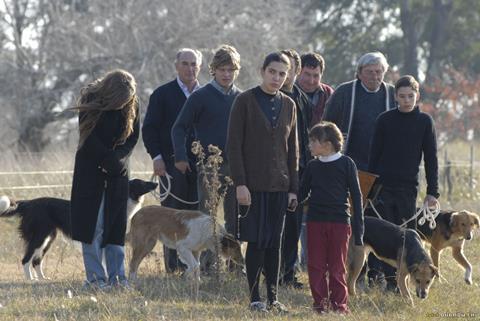 Small, dark and intriguing, Albertina Carri’s La Rabia takes the New Argentinian cinema’s fascination with what lies beyond the city (El Aura, La Nina Santa, Encarnacion) to its logical extreme with a claustrophobic story of sex, brutality and death set in a remote farming community on the Pampas. Tense and edgy, La Rabia’s doom-laden narrative of rural lust and violence has the fatalistic inevitability of a Greek tragedy, but its methods are modern, with animated inserts reminiscent of recent Australian title Look Both Ways, amplified forest-fauna sound design, and a laconic, nicely disorienting way with story structure.

The result is a film that, like Carri’s previous two, Geminis and Los Rubios, seems destined for minor arthouse success once its festival run is over - though outside of Argentina, only Spain and France can be considered safe theatrical bets.

La Rabia opens with a full-screen disclaimer informing us that ‘the animals that appear in this film died as they naturally would’. Bloodily, in other words, and in abject terror - as we have plenty of time to witness in a graphic scene of a pig being slaughtered. This is no rural arcadia: from the start, Carri’s view is that nature is cruel, and Pampas farmers even crueler.

It takes a while to work out how the various characters are related. Ladeado, a young boy with an elderly, shambling gait, bashes a sack of what turn out to be baby weasels against a tree trunk. An even younger mute girl who trails along behind him likes taking her clothes off. A couple have kinky sex involving belts and collars in a shabby, old-fashioned farmhouse. We assume at first that the four characters are a family - mum, dad, and two kids - but they’re not. The little girl, Nati (Duarte) is the daughter of gruff, authoritarian rancher Poldo (Carrizo), while Ladeado’s father is shifty Pichon (Lorenzo), a fellow farmer. It was Pichon and Poldo’s browbeaten wife Ale (Couceyro) who were having the rough sex.

This will not be the first time in the film that we are forced to revise our assumptions; and the technique works alongside the sombre colour palette and the lack of clear location pointers or period markers (if it wasn’t for the appearance of a Walkman, we could be in the 1960s).

Carri likes to work on an instinctive level, but sometimes she goes too far. Though they stem from Nati’s disturbing drawings - which will be a catalyst for the film’s dour final act - the violent animation sequences add little to our understanding of the story.