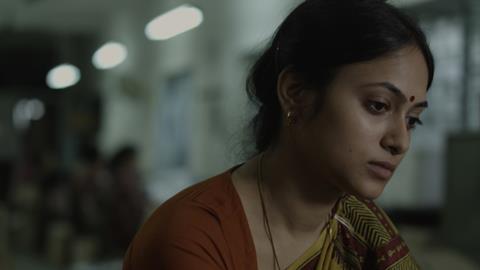 It is clear from director Aditya Vikram Sengupta’s art background that her debut film Labour Of Love (Asha Jaoar Majhe) would be a beautifully presented piece, but while the visuals and striking and often poetic, the film doesn’t succeed as narrative cinema favouring dialogue snatched often off-screen and relying on the audience to buy into its slow-moving slice-of-life drama.

The film works well in terms of its visual and its immersive sound design, but not so much as a story about real people.

Screening in Venice Days the film is aimed fair-and-square at the art house market, though most likely its life will be on the film festival circuit where its well-meaning style and art credentials may appeal to some programmers.

The film brings focus to the hard lives endured by ordinary working people in Calcutta, with the camera following a young married couple as they go about their day, though only actually meeting in a fantasy sequence where they seem happy and content. The woman (Basabdutta Chatterjee) works in a handbag factory while the man (Ritwick Chakraborty) works the night shift at a printing press, meaning they never get to see each other.

The film flits between them, following their activities – sleeping, travelling, eating alone, carefully saving money – though a rare moment of drama emerges about half way through when the radio reports a man’s death due to the loss of his job after the closure of a mill. It is shot with often glacial elegance, but while we examine in close-up the mundane things around their lives the film rarely paints them as real characters with personalities – yes things are hinted (longing looks, sad empty faces), but never really explored.

The film works well in terms of its visual and its immersive sound design, but not so much as a story about real people.