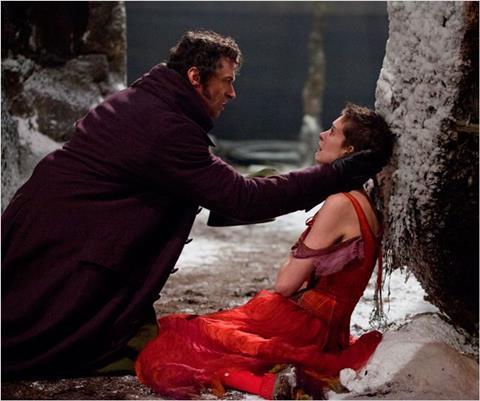 With Hugh Jackman and Russell Crowe starring - and singing - for director Tom Hooper, the highly anticipated Les Misérables is a bold sung-through adaptation of the massively popular stage musical that substitutes close-up intimacy and naturalism for theatrical scale and sheen. The approach could well divide audiences, with fans of the show and musical theatre in general falling heavily for the full-on emotion and non-fans finding it all a bit confusing and over the top.

Jackman stands out for the force of his performance and the nuance of his singing.

The balance between the two groups will go a long way to determining box office performance when worldwide distributor Universal releases the Working Title production on Christmas Day in the US and through the early New Year in international markets.

Musical adaptations are notoriously unpredictable at the box office and to reach far beyond the built-in audience - the 60 million people in 42 countries who have seen Les Misérables on stage over the past 20 years - Universal will need to leverage the awards season attention that this beautifully crafted film is already beginning to attract.

Gladiator writer William Nicholson worked on the screenplay with original show creators Alain Boublil, Claude-Michel Schonberg and Herbert Kretzmer and the team jumps straight into the story of love, sacrifice and redemption set against the backdrop of 19th century France.

In just a handful of pacey scenes, the film takes Jackman’s Jean Valjean from the brutal prison where he first encounters ruthless policeman Javert (Crowe) to his new life as a mayor and factory owner. Valjean’s encounter with prostitute Fantine (played by Anne Hathaway) leads him to adopt Fantine’s daughter Cosette.

Pursued by Javert for breaking parole, Valjean goes to Paris with Cosette where they become involved with a group of students trying to lead the struggling citizens into rebellion.

The film follows the stage show format of having the characters sing almost all their lines, but here the singing is more natural and speech-like than it could ever be on stage. The approach preserves the feel of a musical but offers little context to ease newcomers into the story.

Hooper (best known, of course, as director of The King’s Speech) chose to have the actors singing live on camera rather than lip-synching to playback and the decision gives many scenes a real emotional force. In early scenes particularly, that force is underlined by shooting characters in close-up and often singing almost direct to camera. The effect is most dramatically felt during Hathaway’s anguished delivery of I Dreamed a Dream, one of the shows best-known songs.

As the story goes on, scenes begin to open out and the songs become more elaborately staged. Another key number, Master of the House, allows Sacha Baron Cohen and Helena Bonham Carter to provide comic relief as sleazy innkeepers. And love song One Day More is performed as a nicely staged ensemble piece.

Among the individual actors, Jackman stands out for the force of his performance and the nuance of his singing. Crowe’s singing is less confident but his intensity mostly makes up for the lack of vocal range. Elsewhere in the cast, Amanda Seyfried (from Mamma Mia!) makes an appealing adult Cosette and Eddie Redmayne (from My Week With Marilyn) is strong as Cosette’s love interest Marius.