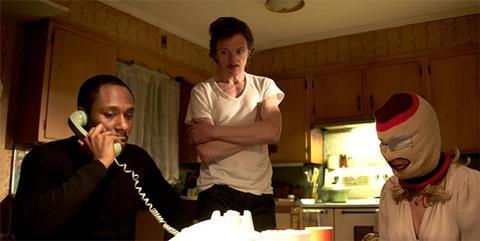 The smart and deliciously entertaining crime caper makes for the perfect memorial to the late/great Elmore Leonard (who died recently and is an executive producer on the project) as it weaves a sly, witty and beautifully structured tale of two ex-cons who get more than they bargained for when they kidnap a real estate developer’s wife.

Life Of Crime is that rare thing – a clever and gently twisted crime thriller that weaves its smart tale with elegance and wry humour…ends on a smarty twist and never over-stays its welcome.

Set in Detroit of the late 1970s, this pitch perfect adaptation of Leonard’s 1978 novel The Switch might lack the sheer star power of recent Leonard adaptations such as Get Shorty, but the casting is spot-on, the dialogue zings and the interplay between the characters a delight as a bunch of minor league criminals set about trying to out-con each other. Strong reviews should help release, with crime fiction fans hopefully rallying to the cause.

John Hawkes and yasiin bey (aka Mos Def) star as Ordell Robbie and Louis Gara (the characters played by Samuel L Jackson and Robert De Niro in Quentin Tarantino’s Jackie Brown, set 15 years later) fresh out of prison where they bonded, and who team up to try and fleece Detroit property developer and secret embezzler Frank Dawson (Tim Robbins).

Their seemingly simple plan is to kidnap Frank’s blonde trophy wife Mickey (an excellent Jennifer Aniston) while he is off on a business trip and hold her for ransom. Complications come when it turns out Frank is planning to divorce Mickey and shack-up with his frisky mistress Melanie (Isla Fisher), and so is in no great rush to pay up…especially since Melanie takes control and won’t let the kidnappers speak to Frank.

Louis (the ever-excellent Hawkes) starts to bond with Mickey while Ordell heads off to try and negotiate with Frank (though ends up having to deal with Melanie), while things are also complicated by their employment of slobbish racist Richard (Mark Boone Jr), a Nazi fetishist whose house is crammed with memorabilia as well as an extensive gun collection, who favours peeking at Mickey through holes he has drilled in the walls and doors.

When she hears about her husband’s duplicitous behaviour Mickey starts to suggest other ways to get money from Frank and new plans start to be developed, and the story spins off in a series of wild and amusing directions.

Writer/director Schechter (whose previous work includes Goodbye Baby and Supporting Characters) revels in the sly and gleefully absurd characters and the slippery dialogue, and crafts a film that makes the most of the 1970s backdrop in terms of design and costumes.

This is just the sort of film Jennifer Aniston should do more of (rather than the rather self-congratulatory We’re The Millers) and she is wonderful as the sad but savvy Mickey. Equally good as John Hawkes (gentle and amusing) and yasiin bey (colder but still so cool) as the would-be kidnappers, while Isla Fisher has a whole lot of fun as a sexy but much smarter than she first seems mistress.

Life Of Crime is that rare thing – a clever and gently twisted crime thriller that weaves its smart tale with elegance and wry humour…ends on a smarty twist and never over-stays its welcome.