Chloe Sevigny stars as infamous Lizzie Borden, who killed her parents in 1892 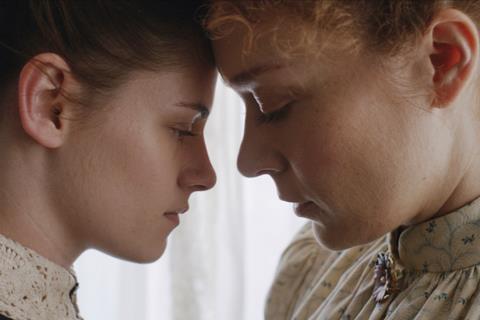 Based on the true story of Lizzie Borden, a Massachusetts heiress who killed her wealthy father and stepmother in 1892, Craig William Macneill’s feature debut recreates the story in the mode of gothic psychological horror. Starring Chloe Sevigny as the titular anti-hero and Kristen Stewart as an Irish housemaid who may have conspired with her to carry out the murders, Lizzie is, at best, a powerful showcase for the two actors. At its worst, it’s a tiresome and unappealing exercise in the inevitability of a family’s mutually assured destruction.

With its strong performances and sensationalistic premise and execution, Lizzie may receive some modest commercial play, both in the US and in overseas territories. Indeed, Sevigny has never been more bare and bold; her icy stares could freeze a bonfire; in moments of simmering rage, it looks like she could literally explode. Certainly, her performance will make for an alluring trailer.

The film begins six months before the murder with the arrival of Bridget (Stewart), an Irish immigrant who goes by the household name “Maggie.” If Lizzie is quick-tongued and strong-willed, unafraid of challenging her wealthy domineering father Andrew (Jamey Sheridan) and committing the social taboo of going to the theater without an escort, Bridget is nearly the opposite: subservient, fragile, and soft-spoken: She recognizes her lowly place, even if she understands her oppression.

Tensions within the household quickly begin to escalate. Lizzie has an epileptic fit at the theater, putting further pressure on the Bordens to find a way to keep her from “tarnishing” the family’s reputation. Then Andrew begins to find threatening notes on their doorstep (“Your sin will find you.”) Worrying for his safety and his legacy, the patriarch invites his ne’er-do-well brother John Morse (a dastardly Denis O’Leary) into their home to make plans for his estate in case something happens to him. When Lizzie catches word of their plans to institutionalize her, she tries to stand up for herself, challenging her father and her uncle for control.

Lizzie’s intensifying conflicts with the two men provide the film’s nastiest confrontations; in one startling scene, a raging Andrew slaughters Lizzie’s beloved pigeons and then forces the family to eat them for dinner. As Lizzie sits at the dinner table while the birds are served, she quietly seethes with inner fury, her body trembling with an anger she can barely contain. (It is one of many startling moments that Sevigny nails.) Andrew, meanwhile, begins slipping into Bridget’s bed and taking advantage of the young lass, just as Lizzie and Bridget begin to find themselves inexorably drawn to each other. It becomes only a matter of time before Lizzie cracks, breaks out the axe, and dispenses her with parents.

Before revealing the act itself, screenwriter Bryce Kass takes a step back from the house of horrors and pivots to the investigation and court case that followed. Here, the film takes on the whiff of courtroom drama, but Kass and Macneill are far more concerned with character study than plot. Though the story touches on a budding relationship between Borden and Bridget, it is the individual characters that are far more interesting and complex. Hardly a love story, the attraction of the two women emerges out of their suffering rather than any kind of growing understanding.

Just as Sevigny is full of steely gazes and brittle quips, Stewart is beautifully anguished; her kohl-eyed face revealing years of sorrow. But together, their relationship never reaches the kind of authenticity or deeper intimacy that would give the film an emotional anchor. Rather, like a horror film Lizzie provides its thrills through shock value. When the murders are finally shown, it’s a lurid, gruesome, and bloody freak-show, like De Palma’s Carrie by way of Sophia Coppola’s recent similarly-set period film The Beguiled. Adding fuel to the film’s frightful tone is Jeff Russo’s eerie score, full of screeching high-pitched violins and ghostly rattling.

Director Macneill (whose short film Henley played at Sundance 2012) credibly evokes the repressive and pristine environments of upper-class New England life. The house is a strong character in and of itself; dank and sterile, lit by candles with forever creaky floors, it provides little warmth or respite for the characters. It’s no wonder that Lizzie and Bridget take refuge in a hay-filled barn outside the home. But viewers of Lizzie are offered no such solace. Unrepentantly grim, the film offers an irrevocable plunge into death, madness and psychological ruin.