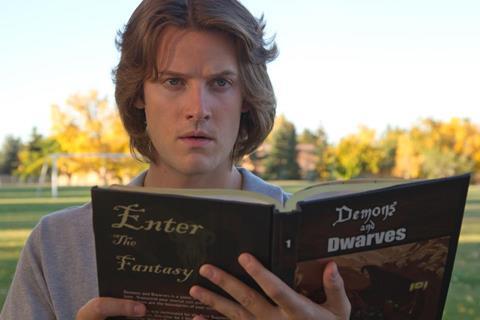 Low-budget Canadian comedy Lloyd The Conqueror delivers plenty of ‘live-action role playing’ laughs – or LARPing to you and I – to hint it is the sort of broad comedy that could easily find a welcoming (if probably modest) theatrical audience as well as being an easy fit into home entertainment.

The charming thing about Lloyd The Conqueror is that is genuinely seems to have an affection of the LARPing world.

The Calgary-made film has played a few film festivals – and recently screened at the Fantasia International Film Festival in Montreal – and while it obviously lacks the big name performers to help it truly break out, there are enough recognisable performers to help it appeal to genre fans and LARPing aficionados in particular.

Shot in a RED digital camera, director Michael Petersen’s nicely structured film has the look and style that bely its low-budget origins, and while its fans are legion and committed, there is just no getting away from the fact that to the outside world the whole LARPing scene (as seen in the Paul Rudd starrer Role Models) is intrinsically amusing.

The plot is relatively straightforward. Lloyd and his two slacker buddies would rather spend their nights gaming the concentrating on reports that have to ben written for their college course.

It turns out that Derek (Mike Smith), their professor, also revels in the title of Derek The Unholy in the LARPing world, but also happens to need some new opponents in a regular tournament if he is to retain his winning title. Naturally, he suggests the only way the boys can get the grade is to enter the tournament – and so the Forces of Light are born.

The charming thing about Lloyd The Conqueror is that is genuinely seems to have an affection of the LARPing world, and while it would have been far too easy to poke fun at bearded men in robes battling trolls and demons the film plays more on Lloyd and his inept buddies than on the strange world they find themselves part of.